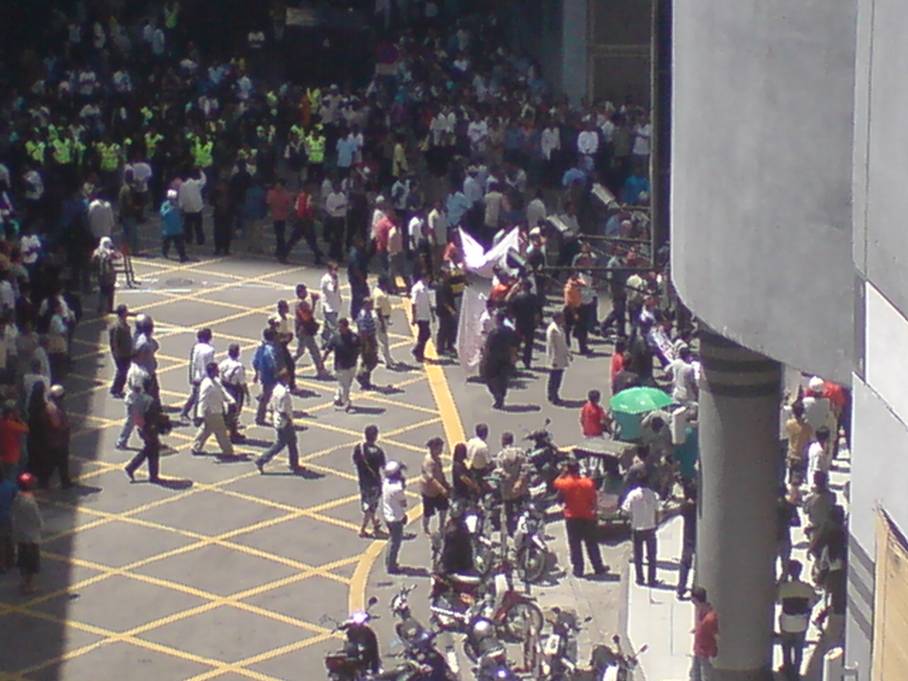 … right after their friday prayers. (again!). what? after pray pray, it is fight fight?
and i heard that some of the slogans they chanted had to do with islam. what has islam to do with the protest? misusing their faith again!

here is a very good advice from friend, stanley (the same person who wrote the letters to the PM and the star):

Good Day and Peace To all You Guys,

WARNING to all beloved Malaysian Penang Indians, Chinese and Malays. Please do not interfere in the Demonstration that is going on now in front of Komtar organized by UMNO. They are trying to instill racial hatred among the races in Penang thus leading it into a another May 13, so that the ARMY will take over the state and thus leading it to UMNO to rule the state. DO NOT come out from your homes, even to see the gathering.. It will make the crowd bigger as it is now that hundreds had gathered there and are shouting slogans of ISLAM. They are misusing their faith and trying to pull our new elected government down.

Dear Malays and Muslims of Penang, We assure you that, we are together in this struggle with the rakyat and let us unite in this time of troubles cause by UMNO and stand united as BANGSA MALAYSIA. We are your brothers and sisters.. We stand UNITED as one race.

Indians and Chinese, please bear in mind that this problems are not cause by the majority Malays in Penang. The crowd there are from UMNO.

Parti Keadilan Rakyat, PAS and DAP Malays are against the gathering and are condemning UMNO for creating a racial crisis. It was clear when Prime Minister Badawi warned our Chief Minister Guan Eng about the NEP, he was in a way giving signal to the UMNO Malays to hold a protest. He warned Guan Eng not to say things that could create racial tensions. But at that time no Malays had got an idea to protest on this issue. Just because of him warning Guan Eng, the UMNO Malays in Penang has stand up and hold this protest in support to Abdullah.. Who is the cause of this problem now…

Stay away from there and any other up coming protest to come. They have the right to protest as a citizen. Anything done by them against the law will be taken care of by the police abd FRU now there. Just ignored any troubles and callings to join in the protest…

When they find no one is joining them or responding the the protest, they will stop by them self’s.

WE LOVE YOU INDIANS MALAYS AND CHINESE

PLEASE CIRCULATE TO ALL PENANG CITIZENS !!!!

malaysiakini report as of 5.15PM:

Some 1,000 Umno members and supporters staged an one-hour protest outside the Penang state government office in Komtar this afternoon.

The crowd – which gathered there after Friday prayers around 2.30pm – chanted slogans such as ‘Don’t sideline the Malays’ and ‘Do not abolish the NEP’.

There were about 3,000 onlookers and most of the shops nearby inlcluding Maybank in Komtar were briefly closed.

About eight FRU trucks armed with water cannons were deployed and the crowd dispersed after the police gave the protestors a five-minute ultimatum.

A number of banners and posters were seized but no arrests were made.

Earlier today, Inspector-General of Police Musa Hassan had warned that the gathering in Komtar would be declared illegal and arrests would be made against the protestors.

PENANG: Police have dispersed the crowd which held a short street protest near the Komtar building on Friday.

Banners and posters were seized but no one was arrested.

The protestors began gathering in the area after Friday prayers to demonstrate against the DAP-led state government.

Earlier Friday, Inspector-General of Police Tan Sri Musa Hassan had warned the public not to assemble illegally at the location.

He said those who defied the order would be arrested for illegal assembly.

just like the other demonstration of UMNO and also PAS, they always did it after friday prayers. why? presumably it’s easy to get the crowd together. after all they came for the prayers already, so just asked them to adjourn for the protest… but to engage at something illegal like this after prayers? i’d better not say further else someone will point an ‘islamaphobe’ finger at me again. the demo itself will speak for everyone!

the report had said that the police chief said arrests would be made for illegal protest… but there were no arrest at all made!
yes there were FRU trucks on hand with water canon, but the water canon were not used! fine, if  there was no violence and they did disperse peacefully when asked to, no need to use, ok… but why no arrests made?

the protest was led by penang umno secretary azhar ibrahim, the same idiot who called on the federal government to scrap all mega projects in penang. as peter tan blogs, so what! we don’t need those mega projects anyway!  and maverick rightly said that all these projects were awarded to UMNO cronies, so if want to scrap, all the better! it’s the UMNO cronies who will lose, not us ordinary penangites.

all your people, especially penangites malays, please heed stanley’s advise here ok.  stay away from any protest called by UMNO. however, if you feel you have a right to join the protest, nobody can stop you BUT only if the protest has the right direction. calling for NEP not to be abolish is not the right direction since this had been promised by DAP before the election and lim guan eng’s move of abolishing NEP had received the support of PAS and PKR, all whom are malays. oh btw, just before the demonstration, lim guan eng had a meeting with 21 muslim NGOs and they all were satisfied with lim’s feedback that malays will not be sidelined.