You are here: Home › christian › allah and the after friday prayers protest 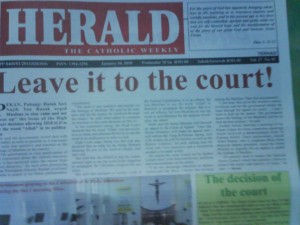 here’s the latest issue of the herald (10 jan. 2010). i wonder after all the publicity, will more people be reading the herald? uh oh, no lah. herald is not on sale in public at all. the herald are only sent to churches for distribution among the church goers. well… maybe more church goers will read it, seeing the much publicity over it. good lah. this week’s herald, there are 4 articles written by me. the 5th article did not appeared!

it is now… no, even before yesterday when the churches were attacked… it is now a known fact that the court of appeal will overtun the high court’s judgment in allowing herald to use allah. of course they will use the excuse of ‘national security’. they will say, look at what happened – the burning of churches, the emotion-charged protest – if herald is allowed to use allah, all these will escalate.

oh well, i was thinking if they (the protestors, fanatics, bigots, extremists – which include the umno leaders who oppose the court decison) love their allah so much… but does their allah love them? remember the hymn i posted? “but only when you love all men, can you partake of god’s love” – do they ever love ALL men, men who are of different faith from them. how can they say they love allah and they are defending allah (btw, allah doesn’t need anyone to defend HIM!) when their hearts were so full of hatred for others (and especially so when they always protest after firday prayers!!).

now where was i? i was saying, if they love their allah so much, ok lah, we christians are loving people, so we might as well give in to them – we won’t use allah. let them win, if that’s what they want… but what kind of vistory is that?? at least we have the consolation what we won through the high court. the high court already decided the home minister have no right to ban us from using allah. everybody know that for a fact already, so now we let go allah. i like this idea as it is very telling on them (the extremist muslim) and us christians.

i’m too tired to talk about the protests that happened yesterday within the mosques in KL and shah alam. they had been spewing so much nonsense (verbally and the banner) that the more i read, the more geram i felt and i felt so much in wanting to respond/rebuke but no point to waste my time/strength on them. anyway, many commenters, say from the malaysian insider and malaysiakin had already done that. also thought of putting up pictures of their protest but hesitate to do so as don’t want to give them the publicity!!

however, there’s one point i would like to pick on – our dear PM getting so angry that people had been pointing fingers at umno for the churches attack. why not? there’s no fire without smoke – umno provided the smoke. remember so many umno leaders came out to condemn the high court’s decision? first of all the mourning khir toyo, then the defence minister (zahid), the deputy minister of the ministry of internationaltrade and industry (mukhriz), the minister in the prime minister dept (nazir). then of course we have the PM, DPM, HM (home minister ok, not headmaster) who sort of encouraged the people to protest. the PM had said “we can’t stop them if they want to protest”. why should he said that when he could have give warning to the people not to protest? he could have said something like “please do NOT protest. this is not the proper way to do things. wait for the court”. when he said “we can’t stop them if they want to protest” sort of give signal or permission for them to start protesting… not only through demonstration but violence like burning churches!

well, not only i of course but many many people of the public and pakatan rakyat are pointing fingers at umno for fanning the tension. here is one comment from someone with the handle ‘hibiscus’ in malaysiakini, which i find very good, which speaks my sentiments:

PM Najib Razak said today fingers should not be pointed at Umno for the attacks on three churches in Kuala Lumpur. If UMNO is not to be blamed, then who is to be blamed? With suggestive statements by UMNO leaders indicating to Muslims it is OK to be confused and feeling threatened, one does not need much intelligence to see their berserk behavior coming. That no UMNO leaders even cautioned the hooligans in the days leading up to this dark Friday suggests tacit approval from UMNO leaders. Now Fridays seem to be moments of anxiety that some madness will happen, cow head incident happened on a Friday, these latest acts of hooliganism happen on a Friday. One would have thought that after a person prays he is more aware of his sins and so come out of his place of worship with a repentant heart, show more compassion and understanding to others, exhibits more love to his neighbour. But what we see is there are people who after his prayers, come out acting like the devil.

note:  link for a few others who agree umno to be blamed.

“with suggestive statements by umno leaders indicating…..”. these umno leaders themselves, through what they said, were encouraging the muslim to protest!

“one would have thought that after a person prays he is more aware of his sins and come out…..” how true. that was what i had been alluding to when i mentioned their ‘after friday protest’ that all their protests seemed to be done after praying. i just can’t imagine christians, after sunday service, came out with banners and shouting wildly condemning people of other faith. it’s just not right at all, not right. i remember long ago, one of the priest used to say “you are in mass now (praying). after mass ends, and when you want to leave and you notice somebody blocking your car, you started to curse at the driver for blocking your car so that you can’t leave… then what is the meaning of attending mass? you just pray for one hour inside the church and you came out of the church full of anger… what’s the point of coming to church then?”

well, tomorrow i’ll be at the church working and i’m keeping my fingers crossed nothing will happen. you know, our church in macalister road has a surau just opposite us and another one about 200 metres away from us. of course we don’t fear anything from them as we had been existing thus for years and years.

One Response to "allah and the after friday prayers protest"