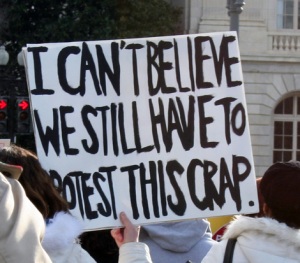 translated – “this is our culture”.

who was it was saying “ini bukan budaya kami” and even had this ‘budaya’ stuff advertised on tv, when the opposition (or NGO/activists) were protesting?

but yesterday we learned that THIS (protest) is budaya umno because the home ministry allows the muslim people to protest.

btw. at the last sunday morning protest in penang at dewan sri pinang  (opposite the high court), my friend who was there told me that 3/4 of the protestors were mamak!! and when he asked one policeman what was happening, the police said “their orang bodoh lah!” (they are stupid people).

in the meantime, please click on ‘read the rest of this entry’ to read a letter from malaysiakini. the writer, a malay, had said it articulately what i’m going to say, my true sentiments. well, for one thing, the heading says it nicely – PROTEST OVER ‘ALLAH’ RULING EMBARASSING. but our home minister has thick skin. he won’t be embarrased.

you can read the letter from malaysiakini but i’m going to produce it here anyway as i like it very much. i will highlight (bold) what i feel strongly.

(note: the pic here was taken from this blog)

I refer to the Malaysiakini report Home Ministry applies for stay on ‘Allah’ ruling.

I fail to understand the logic of some of my fellow Muslims protesting in Penang and the federal government’s (our prime minister, the Prime Minister’s Department, the home minister and home ministry) stand to appeal over the High Court’s decision over this issue. Why should Muslims get ‘heated up’ ?

The reasons given were:

1. As quoted by Syed Hassan Syed Ali, secretary-general of Malay rights group Pribumi Perkasa: ‘We fear that the court victory will mean that Christian missionaries will now use the word, confusing (the identity of) Muslims and undermining religious harmony.’ This is the ‘confusion theory’ that has been given as a reason. There is also a claim by the federal government that it will threaten national security.

2. Due to this ‘confusion’, it seems we Muslims are not able to distinguish between the ‘Allah’ of the Christians or that of the Muslims.

Now, when we debate this matter, it has to be done with a sound mind and a clear understanding of whether the ban on the term ‘Allah’ was done fairly to us Muslims and non-Muslims alike. Consider the facts :

1. The word ‘Allah’ has been used by pre-Islamic Arabs for God. There is evidence that the word ‘Allah’ existed before the birth of Muhammad (PBUH) for thousands of years. It is probably the oldest name man used to call God. Prophet Muhammad’s father’s name was Abdullah (The slave of Allah). This name was common among the Arab pagans and Jews. Abdullah bin Salam was one of the first Jews to convert to Islam in Medina.

2. We know for a fact that the Arabic Christians still use the term ‘Allah’ for their God. The word Allah is used in all Arabic translations of the Bible.

3. Our Sarawak and Sabah non-Muslim indigenous people have been using the word ‘Allah’ for God since the 1800s. I have seen, via the Internet, an 1818 version of the Christian bible, with the words ‘Allah’. I am not sure of its origins though but it makes use of the word ‘Allah’.

4. Other religions too do make mention of ‘Allah’ as their God.

a. ‘Allah’ in Sikhismis one of the names by which Gurunanak Sahib refers to God.

b. ‘Allah’ in Hinduism

i. ‘Allah’ in Rigveda Book 2 Hymn 1 Verse 2. Even in the Rigveda which is the most sacred scripture of the Hindus, one of the attributes given to God Almighty in Book No 2 Hymn No 1 verse II, is ‘Ila’ which if pronounced properly is the same as ‘Allah’.

ii. Allo Upanishad. Amongst the various Upanishads, one is named as ‘Allo’ Upanishad in which God is referred to as ‘Allah’ several times.

I am not an Islamic scholar but claiming that the use of the word ‘Allah’ would confuse us Muslims is really rubbish and to go beyond to claim that it will threaten national security is preposterous. Are we so weak in our faith that we cannot differentiate and we would turn apostates easily just because of the works of some Christian missionaries using this word?

Do Muslims in Sabah and Sarawak get confused? Come on, this is an insult to us Muslims. Are we saying we do not have depth in our faith that we can simply convert out of Islam just because of this? Does our Islamic faith carry such teachings? Is this more of the work of Man rather than of Allah?

We do not need Islamic scholars to tell us this. True Muslims do not need the government and self-proclaimed champions such as these Muslim groups to protest on our behalf. Their very act of claiming to protect our faith shows how shallow-minded these people are – both the protestors and the government.

They seem to capitalise on the political aspect of the situation rather than championing for the true cause of Islam. I’m not sure whether these protestors themselves understand the logic of why they are protesting. This is embarrassing us Muslims – not protecting our Islamic interests.

I shared this news with a few of my old Muslim friends overseas in Egypt, Iraq, Iran, Indonesia and Jordan via e-mail. They could not even believe me when I told them that the Malaysian government bans the use of this word and that some Islamic groups protested in support. They thought I was joking!

We should observe fair administration due to the fact that many of our ministers and department heads are Muslims. We should have treated the non-Muslims fairly as well. The government has confiscated 15,000 Malay bibles of the indigenous people of Sabah and Sarawak even though the word ‘Allah’ has been in use since 1800s.

This news has been published throughout the world. We impose and claim exclusiveness on the word ‘Allah’ when such as act is not even found in our Islamic faith while our Holy Quran even says that Christians do, in fact, use the word ‘Allah’. Is this how Muslim leaders act? Is this called fairness to the peoples of other faiths?

You know what is the talk of the town now? That the court of appeal will override the high court decision. This is already expected by the man-on-the-street. So predictable that many of my non-Muslim friends are betting on the odds that it will be overturned. This makes our court of appeal a ‘kangaroo court’. Is this how the people should think of our government – of which the majority of leaders are Muslims ?

We talk so much about this ‘1Malaysia’ and ‘People First’ (Rakyat di Dahulukan). Looks like this is just more empty talk. We are back to square one as far as the man on the street is concerned . The Muslim leaders in the government and some self-proclaimed ‘champions of Islam’ are the ones giving Islam a bad name, sad to say.

All I am saying is let us put this issue to rest with the high court’s decision and let us move on as Malaysians. If this issue of using the word ‘Allah’ by any other religion is not prohibited by any our Islamic teachings as spelled out in the Holy Quran and the Hadith, then what is the fuss by some misinformed Muslims?

Further appeals and counter-appeals would do more damage to the nation’s reputation in the eyes of the international community and to the unity of the various races of different creed within Malaysia. To the prime minister and the home minister, shouldn’t the government act like true and just Muslim leaders and spend more time rectifying the economic situation rather than appealing over this issue?