You are here: Home › election › wow! jeff ooi can sing! 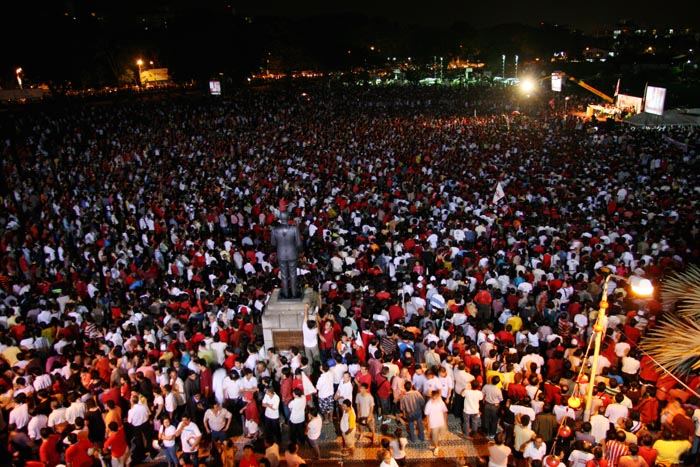 yep! jeff ooi played the guitar and sang at last night DAP’s biggie ceramah at the han chiang school. it was a good change from all the speeches we heard.

yes i attended the ceramah, which was held on the field this time, unlike the previous one which was held inside the stadium. guess the anticipated the huge crowd thus had it on the field. rightly so… as the field was filled with people! for the first time in my life, i see a huge field full of people.  there were some people standing outside the field too. altogether it was estimated the crowd was around 50,000 people!  imagine! compare that to BN ceramah where only 5000 turned up. (ok ok please all, don’t mention about the no. of turnout doesn’t translate to the no. of voters for DAP.).

this will be a quick post as i have no time to really blog on it. i returned from the ceramah at near 1.00am and by the time i was ready to be in front of my computer, it was near 2.00am and i was so tired (because standing for hours!) and sleepy that i can’t give a long post.

ok coming back to the ceramah, lim kit siang and karpal singh were there, and so were many of the DAP contesting candidates who were each given 10 mins to talk. when it came to jeff ooi’s turn, he sang instead! use one of teresa teng’s famous song which has the line "please give me back my lover" change to "please give me my votes". the other song he sang was the bahasa ‘undi’ song, changing it into "jangan lupa kewajipan anda undi DAP".

it was a fantastic ceramah as the crowd was very responsive. cheers, shouts and whistling everytime. not forget shouting of slogans and all that.

like the BN ceramah i attended, being under the capacity of MAFREL observer, i will write a report later and put a link here. in the meantime you can go to lilian’s blog to read about the ceramah. also read about it at anil netto’s blog, where he estimated the crowd at 60,000!

note:  picture taken from malaysian insider. please click on the picture or the link here to see a bigger view.