You are here: Home › politics › of course! the UMNO youth chief defended his men

“nothing new or seditious in their speeches” as he said.

nothing seditious? when one say things like “do not challenge our rights. if you do, may 13 will occur”? or when one urged him to use the keris?

yeah sure nothing seditious because they are your own members. if it comes from some non UMNO members, you will scream seditious.

see more of the seditious remarks at kit’s blog.

do you know that kerismuddin also said:

some of the issues raised by umno youth delegates this year were not new, but certain sensitive matters were made public due to the assembly’s live telecast.

gosh! does this means every year, they had been making racist and seditious comments? well, he said “there’s nothing new…”.

and do you know he is really going to live up to his given nickname kerismuddin when he tells us…. 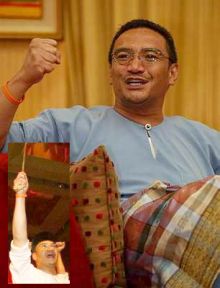 “next year, i will wave the keris again.
you can count on me for that.”Â

that came about during an interview with the star’s reporter, joceline tan.

when asked why did he had to keep brandishing the keris, he respond:

what is about the keris that makes people so uncomfortable? the keris is on the umno flag. there are two keris on the umno logo. it is the symbol of malay culture. it’s not umno. it’s not pemuda. you give keris to non malaysa and non malays give them toÂ  me at function. tsu koon showed me a huge keris during our penang convention.

my dear mr education minister, we are not uncomfortable with the keris alone by itself. we are uncomfortable when you wave the keris and shout “we will defend our rights!”. any 10 years old will interpret (and you are the education minister, you don’t know that???) it as “don’t mess with our rights eh. if you do, we will defend our rights with this keris” – which means using the keris on non malays…. now, isn’t that frightening?

yes, as ktemoc pointed out, the waving of the keris must seen in its whole context.

also, the fact is, as farish noor pointed out, you mr kerismuddin, had use the keris, a beautiful universal symbol as a tool for racial politics.

the last line of kerismuddin’s remarks in the interview, when asked about his deputy, khairy boy, really stand out:

whoaa!!! see? what many of us had been talking about on the famous son-in-law is true!!

3 Responses to "of course! the UMNO youth chief defended his men"