You are here: Home › malaysia › great! now the chief issued a warning 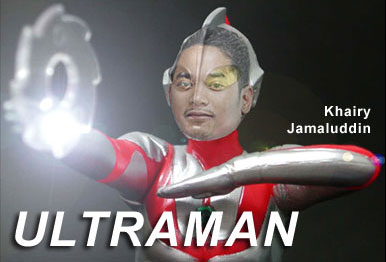 “do not challenge us” UMNO youth keris wielding man warned MCA youth. why? just because MCA youth demanded that his deputy, khairy boy should apologise. (no, it is not because they have a super ultraman in thier party to fight for them), this hishy guy kept on saying again and again that his deputy boy was misunderstood.

“Khairy had said he was misunderstood and that the matter would be raised at the BN Youth meeting. What more does MCA Youth want?”

first thing first, mr UMNO youth chief @ mr education minister, only you seems to stand up for him saying he had been misunderstood, but we all know better than that. you asked what more does MCA youth wants? an apology! because we all understood him perfectly when he said the chinese community would take advantage of your party if your party is weak. he was playing the racial card yet you stood by him and now instead warned MCA youth. how ironic!

the picture of ultrakhairy you see here is taken from jeff ooi’s blog. the first time i saw it, i laughed out aloud. it was so funny. do read jeff’s post on this apology issue and esp. the comments from readers.

in the meantime you should also read ktemoc’s blog, where he pointed out that now khairy is playing the religion card. remember in my blog earlier, he had stubornly refused to apologise because he was defending “UMNO and islam”? see, he brought in religion! read about this also in malaysiakini.

2 Responses to "great! now the chief issued a warning"