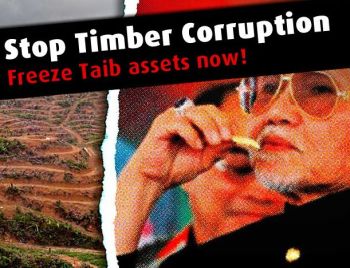 well, yesterday, there was an anti taib protest, calling on a halt to timber corruption in london. on the 3r of march and 9th of march, there will be one in the US. see this special site ‘stop timber corruption‘ for details. here is the info on the main page:

Since 1981, the Malaysian state of Sarawak in Borneo has been governed by Chief Minister Abdul Taib Mahmud, one of the most corrupt politicians in South East Asia.

While Taib himself has personally profited immensely from the destruction of the Borneo rainforest through logging and oil palm plantations, Sarawak’s indigenous communities have lost their land, the source of their livelihood, and have been increasingly marginalized.

Taib and his family members have illegally acquired assets worth billions of dollars in Malaysia, Canada, the UK, Australia, the United States and other countries. All these assets should be restituted to the people of Sarawak, and the Taib family should be prosecuted for corruption, the abuse of public funds, fraud, money-laundering, tax evasion and other related crimes.

Help us to build up international political pressure against the corrupt Taib family and sign the online petition against timber corruption.

there is also an online petition, where, when you signed, your email will automatically be send to some authorities in several countries, including our very own MACC of course. the problem is MACC won’t dare to touch taib. so much had been revealed by the sarawak report already, and yet MACC played deaf and dumb. also, sad to note that there are protests out of malaysia but in malaysia itself, where the corrupt person himself is, there are no protests!  why the people of sarawak fear him eh? they should do a mubarak on him!!