You are here: Home › malaysia › thank you, clare rewcastle brown, and well done! 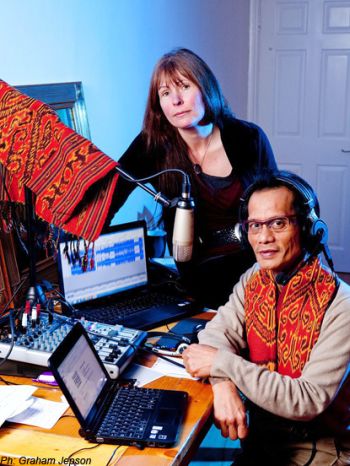 … and hope you will keep on doing it!

who is clare rewcaste brown (picture) and what am i talking about?

she’s the one behind the popular website, sarawak report, which exposed sarawak’s chief minister, taib’s corruption. she’s the sister in law of former british prime minister, gordon brown. together with a dayak, peter john jaban (picture), the two of then also started radio free sarawak.

when sarawak report first surfaced,  many people were enthralled by it and since then, it was reported to have received 18,000 hits a day.  ain’t no surprise that there are so many

visitors. many people, like me can’t wait to read the expose on taib.  many people knew of how corrupt taib is. i really can’t stand seeing taib’s face. stealing from the rakyat! whenever i see his face, i see money all over his face and i think of the poor suffering sarawakians.

thus i was very glad when sarawak report came into existence and really marvelled at how the people behind it uncovered so many secrets of taib. i admire the persons behind it… and now i know who. she and jaban decided to reveal their identity because they fear for their lives.  she had said:

“Before Christmas, Taib’s disaffected US aide Ross Boyert was found dead in a Los Angeles hotel room with a plastic bag around his head. The inquest is still pending but there was a sense that Peter and I could be in danger. Rather than hide, we’ve decided to come out fighting,” she told the London Evening Standard.

i hope nothing will happen to them. i hope they will continue exposing taib. thank you clare and jaban for sarawak report and for radio free sarawak. yes, keep on fighting. keep on fighting until that scum CM fall!!

btw, apart from sarawak report, there is also another website on sarawak, known as ‘sarawak indigenous ommunity news’,  which was started by me. er… actually i mean i just set it up. a friend, bk ong, an active activist, when he started to be interested in sarawak election and all things sarawak, requested me to set up the blog. we both choose the name. the design of the header was done by my online friend, witsO. hmm… long time didn’t see him around online. wonder what happened to him. i don’t post anything there but i do help ong to set up things now and then when he requested me to do so (like putting up the radio free sarawak icon, with link).  when it was first set up, it received not many hits but now thanks to bk ong’s dedication in making so many posts, it seems to be getting popular. do bookmark it ya!