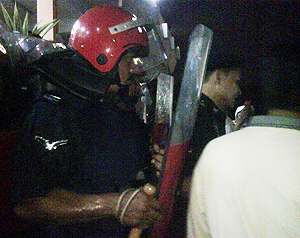 once again, you are showing us who’s your big boss.

once again, you are telling us you only act against the opposition (of federal govt) or against the pakatan rakyat (PR).

once again, we see clearly ‘double standard’ being plaster all over your face.

once again, we find out you are not very partisan.

on 6 march, they stop a dinner and ceramah organised by DAP kepong.

the following day, 7 march, they stop a pakatan rakyat (PR) rally at kelab sultan sulaiman. gosh, the police even sent in water canon truck.  well done, police! so hardworking eh. not much work for you to do i see when perkasa protested or when the infamous cow-head incident happened as we don’t see you stopping them or bringing in water canon.

it was also reported that the police were violent – beating people!

apparently, it seems that at both incidents, they were stop because they were not allowed to give political speech. huh? how silly can the police get eh?? they were political parties so naturally their speeches will be of political nature. you don’t expect them to talk about the sun and the moon or the forest and the trees.

earlier, on 4 april, it seemed that the police were questioning penang CM, LGE and some other state reps for illegal assembly and speeches with seditious contents. my ADUN (sim tze tzin) was questioned too!  even chinese new year open house organised by PR was consider illegal in the eyes of the umno police!!

this is really terrible!! such obvious double standard from the police!! grrr!!  :mad

note: to read more about double standard, please go to the 2malaysia facebook group. invite your friends to join!