You are here: Home › christian › don’t be envious of christian charity

so what if christians extend their charity/love to muslim? or maybe i should ask the other way round – so what if muslim turned to the church for charity?

in our church, we have a beautiful hymn with the title 'this is my commandment' which talks about charity.

REFRAIN:  this is my commandment, love one another as i have loved you

1.  charity is kind, charity feels no envy
charity bears up to the end

2.  charity is meek, charity seeks not its own
charity has faith to the end

3.  charity is mild, charity thinks no evil
charity can hope to the end

4.  charity is just, charity finds joy in truth
charity is patient to the end

read the wordings carefully. see? conversion is never ever on our mind at all when we do charity.

for the christians, these words may sound familiar. ahh…. where have you heard it? of course! in the bible… but wait, the word 'charity' is not there; instead it is 'love'. do look up the bible 1st corinthians 13:4-13. well, didn't i already mentioned in my earlier post that charity is love and love is charity. (actually some version of the bible use 'charity' instead of 'love'.)

Nothing is more valuable and comm

endable, and yet, not one duty is less practiced, than that of charity. We often pretend concern and pity for the misery and distress of our fellow-creatures, but yet we seldom commiserate their condition so much as to relieve them according to our abilities; but unless we assist them with what they may stand in need of, for the body, as well as for the soul, all our wishes are no more than words of no value or regard: for when we hear of any deplorable circumstance, in which our fellow-creatures are involved, be they friends or enemies; it is our duty, as Christians, to assist them to the utmost of our power.

that is only the first paragraph. if you are interested, do click on the link and continue reading.

yes, as a writer, moaz nair, pointed out, charity work is sort of the hallmark of  the christianity faith. that's why, the christian federation of malaysia (CFM) in its national day message/press statement, stressed that they want more freedom to do charity works.

in doing so, if muslim turns to us, listen to the wise cleric, asri – don't blame the church!!

his wise, out-spoken statement can be found in malaysiakini too, CnP as below. following it, is write-up from a muslim convert who talked about how the christians helped his adopted daughter, and about catholic/protestant churches vs the evangelical churches.

Former Perlis mufti Mohd Asri Zainul Abidin said that one of the 12 Muslims who were present at the Damansara Utama Methodist Church's Aug 3 event had denied having converted to Christianity.

While the woman did concede that there were others who have embraced Christianity, she had remained faithful to Islam. 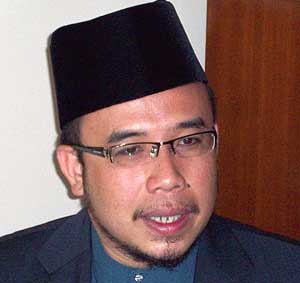 The conversions, Asri (left) said, was the fault of the country's Islamic institutions for failing to help underprivileged Muslims.

"The single mother I met was deserted by her husband and had to raise three children. She could not afford to pay the rental for the house where she was staying and had gone to the Islamic authorities for help, but was turned away.

"Only after she got a support letter from a politician did she get zakat tithe. She was also turned down by the Welfare Department," he said.

Asri said that the woman had confided in him that a Christian friend had recommended her to seek help, which led to her relationship with the church, though there was no mention of which church it was.

"How can she experience the greatness of Islam when her fellow Muslims do not care about her and refuse to help her?… When her children are sick the church cares, her livelihood is supported by the church and even her daily needs were provided," he lamented.

According to Asri, the DUMC dinner was not the first time that the woman was caught by the Islamic authorities.

Following the first incident, the Zakat Department promised to help her to open a kindergarden, but when it was not forthcoming, the church again stepped in to assist in paying the rent of the premises.

"Despite being a devoted Muslim, she often bring her children to church. Her children are instilled with Christian teachings by the church. They are taught hymns and certain moral values. For her, all this is done as a matter of survival."

Asri explained that he was told there were many other underprivileged Muslims who were in a similar position had allegedly converted because they were disappointed by the uncaring attitude of the Muslim community and were influenced by the church's goodwill, even though they were not forced to do so.

Do more to help poor Muslims

The former mufti urged Muslims to take responsibility for the situation rather than bashing Christians and churches.

"If we want to escape responsibility, it's easy, we blame it all on the church. We blame them for being the source of all problems. And then we demonstrate and fuel public sentiments against the church for carrying out charity and missionary work.

"But when we do not help and carry out missionary work, we do not blame ourselves. Is this what we have become?" he asked.

While acknowledging the good work of the Islamic authorities, Asri called on them to do more by seeking out poor Muslims and assisting them.

Early this month, Jais raided a dinner that was held within DUMC compound which was attended by 12 Muslims.

The raid has fuelled speculations of proselytisation among Muslims. However, the organisers of the event, Harapan Komuniti, had clarified that it was a HIV fundraiser event.

Malaysiakini
My advice on the issue of proselytisation
Barry Morgan
Aug 25, 11    3:52pm

COMMENT My name is Barry Morgan and I'm 85 years old. I am a Malaysian citizen who arrived from England in 1948 just when the Emergency was commencing.

I worked in plantations and at one time owned an estate in Bruas, Perak. Since the time I sold the property in the late 1990s, I have had more time to follow national issues.

The one that preoccupies me these days is apostasy from Islam. In 1964, I married a Muslim and embraced the faith.

My wife and I had four children and we adopted two others, one an Indian girl. We brought her up as a Muslim but when we attempted to obtain an identity card for her in 1983, it was refused.

The officer at the Ipoh Registration Department made a huge fuss and insisted the girl was Indian and Hindu. My wife, who passed away last year, remonstrated but was unsuccessful in shifting the officer.

As a consequence, my adopted daughter was regarded as a Hindu and treated as such in school.

When she was 16 and studying in Kuala Lumpur, she met and married a staunch member of one of the evangelical Christian groups then mushrooming in the Klang Valley.

Her husband worked in a law firm which was owned by an equally fervent member of the same denomination who converted every employee on her payroll.

My adopted daughter's husband was originally a Hindu. His conversion was met with rejection by his family.

My wife and I were unhappy with our adopted daughter's decision to become a Christian upon marriage but we accepted her right to choose her faith.

The couple had two children before difficulties in the marriage arose. My wife and I were concerned for our adopted daughter and her children.

But our concern was no match for that shown by the members of the church at which the couple worshiped. They rendered the family unstinting support and compassion which had the effect of healing the marriage.

Today my adopted daughter and spouse have three children who are happy to attend church services and live a Christian life of admirable fidelity.

I'm amazed at the support their church gives, not only to them but also to anyone in need, whether it is to unwed mothers, abused wives, children in need of daycare, the jobless, and the sick.

The support is stupendous and frequently rendered by tertiary-qualified women. Their dedication is hugely impressive.

In my occasional interactions with this group of dedicatees, I have tried to tell them they should not try to convert Muslims, the ones who resort to them when they are in need and are much taken by the evangelicals' dedication to their welfare. The reaction to my advice was a polite silence.

Though I'm Malaysian, I'm British by orientation; I know how the British colonial administration handled this issue in India.

They strongly discouraged evangelical clergymen from proselytising Muslim Indians because of the social turbulence it caused.

If the British administrators found evangelicals doing so, the latter would be on the ship back to where they came from.

In India, the mainline Protestant churches and Roman Catholics abided by the stricture against proselytising among Muslim Indians.

But these churches were not discouraged by the British from converting Indians languishing in the nether categories of the Hindu caste system.

The need to show restraint

In Malaya, the British adopted the same attitude: they discouraged Christian proselytisation of Muslims. But recalcitrants from this stricture were almost non-existent – the mainline Protestants and Catholic churches largely adhered to this restriction, subscribing to the tacit social understanding that they should not convert Muslims.

However, evangelical Christianity is a modern-day phenomenon, an importation from the Bible Belt of the United States. They take Jesus's instruction – "Go and make disciples of all nations" – before his ascension into heaven in deadly earnest.

The Protestants and Catholics won't attempt to restrain the evangelicals, although they frown on their missionary fervour. This is because the evangelicals would accuse them of being tepid in their faith and oblivious of Jesus's commandant.

Also, evangelical churches are independent of each other and reject a centralised, hierarchical authority such as the Catholics have and, to a less rigid extent, the Protestants. Hence the attainment and enforcement of consensus among Christians is difficult to bring about.

One finds that on the issue of Christian proselytisation of Muslims there are a host of complexities resistant to easy resolution.

Despite the reluctance of Catholic and Protestant churches, mindful of the recent intrusion by Jais into the Damansara Utama Methodist Centre, they must persuade the evangelical churches to show restraint on the vexed question of proselytisation.

To fail to do so will only cause uneasiness among Muslims and encourage more interventions by the Muslim authorities.

Finally, the government should take steps to facilitate adoption by Muslims.