You are here: Home › announcement › meet a talented penan musician on malaysia day 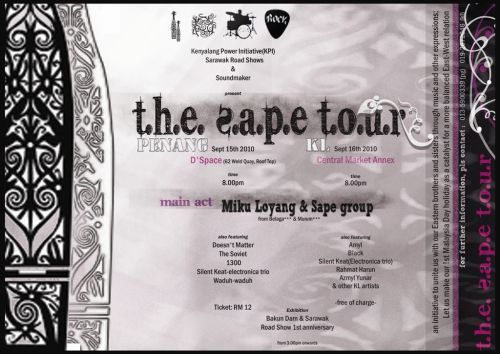 if you are disillusioned with the federal government and had decided not to celebrate merdeka,  then do celebrate malaysia day, which will be on 16 sept. what better way to celebrate it then to meet the sarawakians in performance. a penan, kilah kuit will be playing the sape while miku loyang, the president of the kayan cultural association will join him in duet. miku’s wife, juna saran will be present too, to perform the ngajat dance.  so don’t sit around in front of your computer on 15 and 16 sept. come, celebrate malaysia day with our fellow sarawakians. the event in penang on 15 sept will go on until midnight – the countdown to mlaysia day. here is the information (part only) taken from facebook event page:

Kilah Kuit is a leading Penan sape player from Murum, now living in Sg Asap, Belaga. He has been noted for his musical talent in Belaga from young. He has been invited to play his electric sape for various functions such as new year, welcoming parties, festivals, and even funerals. His expertise in playing the unique musical instrument from the Orang Ulu of Sarawak has made him a much sought after partner for many other well known local sape players in Sg Asap, Belaga. Sape is best played as a duet performance, according to local experts. For this trip he will partner with Miku Loyang, the president of the Kayan Cultural Association, to present his captivating jazzy compositions!

Come to meet this best kept secret from the Borneo rainforest. Find out what is in the music that can keep up the spirit of these special community-many of whom are still leading an endangered forest dwelling lifestyle! Official figures put their number at 16 000, about the smallest ethnic group in Sarawak.

Another partner in the Sape group performance is Juna Saran, wife of Miku Loyang, who has consented to perform her special Ngajat dance for the Penisular audiences.

Malaysia Day will be celebrated for the first time as a national holiday on Sept 16th this year.

Exhibitions:   On Bakun Dam and 1st Anniversary of Sarawak Road Shows, plus mini-film fest on Sarawak from 3.00pm at both locations. More details to come!

details can also be found at the sarawak news blog. the following is the press statement:

Malaysian Election Observers Network (MEO-Net) with 12 civil society groups in Penang is holding a press conference on Sept 6th 10.00am, at D’ Space(62 Weld Quay, 3rd floor of Saw Khaw Lean Kongsi) to launch a Malaysia Day celebration to be held on Sept 15ht at D’ Space from 3.00pm to mid-night. The celebration feature performance by a Sape group which flew in from Belaga, Sarawak, specifically for the event. They consist of 4 performers-2 sape player, 1 Ngajat dancer and a Kayan song singer. Of the 2 sape players one is a Penan from Murum, while the other one, a Kayan from Bakun.All Penangites are welcome to join to make the first Malaysia Day with a national holiday a special celebration to mark a beginning of more understanding between the East and the West Malaysia, with a hope of a more balanced relationship between the 2 sides in the long run.

`We all probably have heard of the Penans in the media and are puzzled why they stick to their nomadic lifestyles.’ said organiser Ong Boon Keong, `But they seems to be too far away for us to find out about them. But for this celebration we bring in this Penan sape player so that you can meet him personally while enjoying his performance. Find out for yourself all about the Penans. Ask him what you want to ask!’ The Penan performer is Kulah Kuit, formerly from Murum and now re-settled in Sg Asap. He is well known for his sape performance-so many local sape performers like to partner with him to perform as a duet in all kinds of functions. For this tour he will partner with Miku Loyang, president of Kayan Cultural Association, to deliver his jazzy, captivating compositions. The group will be accompanied by Ngajat dance and Miku Loyang’s wife, Juna Saran, and a Kayan song singer Bengoh Telang.

The other program for the day are performances by other support performers from West Malaysia throughout the evening eg Silent Keat’s electronica,Doesn’t Matter, The Soviet, 1003(Gazo), Waduh-waduh, etc.From 3.00pm there will also be, at the same venue, a photo exhibition marking the 1st anniversary for the Sarawak Road Shows, a project which send volunteers to Sarawak on a monthly basis to help register voters and provide voter education. There will be another exhibition on the Bakun Dam-the world 2nd largest dam. In addition there will be a mini-Sarawak film festival, featuring local and overseas made films on Sarawak.

All are welcome to attend these 1-day programs to improve our understanding of our fellow citizens from the other side of the South China Sea. Malaysia was formed on Sept 16th, 1963 from the amalgamation of Malaya, Sabah and Sarawak(Singapore was initially part of Malaysia till its cessation from Malaysia later), but the date was not made a national holiday until this year.

3 Responses to "meet a talented penan musician on malaysia day"