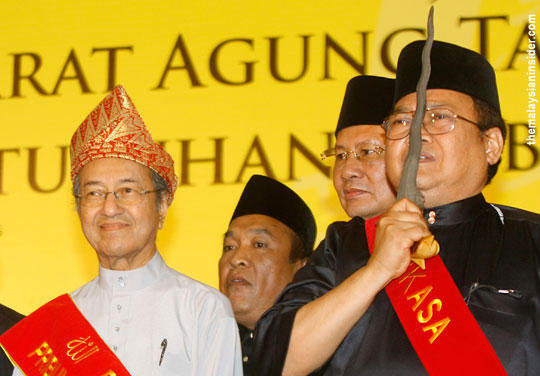 yeah, ikerishim ali, the all almighty defender of:

1.  do malays wants him and perkasa to defend them? defend them against what, who? why?

2.  does the islam faith need to be defended? gee, methink islam is the only religion in the world that need their followers to defend it. why? does this spell insecurity?

3.  did they officially take it upon themselves to defend the king? does the king asked for it or even implied he want to?

oh well it’s their rights to form the group and whatever their objectives are, it’s also their rights but i question their objectives as for one thing i know many malays does not support them. for another, methink they have a hidden agenda and lastly and most importantly, they are very extremist and radical. just look at the recent AGM itself – what had been said were racist and seditious (like invoking may 13 – as they always like to).

i had said it before and i will say again i will NOT want an organisation or group coming up to defend my race and/or my religion.  i will die of embarrassment or shame if there is.  i’m strong, steady, steadfast, secure in my own religion and race – i don’t need anyone defend it on my behalf.

below you’ll get to read about the AGM from malaysiakini (click on ‘read more’). but before that, some comments on what was reported.

Ibrahim warned political parties against making an enemy out of Perkasa. Those that do so will find themselves losing at the elections, he said.

whoa!! as if it is only perkasa and nobody but perkasa and perkasa that will determine the result of the whole election!! i’m impressed!

Another giant replica of a keris  (right) – with the words Tak Melayu Hilang Di Dunia (The Malay shall not disappear from this world) written on the scabbard – stood on the side of the stage.

ROTFL!! the malay shall not disappear from this world? as if they would!! oh they would? what a very pessimistic slogan (not forgetting embarrassing).

Even their chants were the same, cries of “Hidup Melayu” punctuating the points of the speeches. Though this time “Hidup Perkasa” served as a substitute for “Hidup Umno”.

‘hidup melayu’ (long live malays) – it ties in lah… with the other slogan of the fear of malays disappearing from this world.  ahh that’s it… the word… fear. why is it these malays in perkasa fear malays will die off? i don’t know but to me it will reflect badly on myself and my race if someone/some group will to shout ‘hidup cina! tak cina hilang di dunia’.

Ibrahim (left) then hit out at DAP’s ‘Malaysian Malaysia’ and raised the spectre of the May 13, 1969 racial riots.

Malaysian Malaysia “is aimed at seizing the special rights of Malays (and) doing away with the Malay rulers. Its objective is to bring about disturbances and to fracture the unity of ethnic communities in Malaysia,” said the veteran politician.

this man is very delusional.  forever thinking of anything what people do, say, propose, plan  as wanting to seize malay’s rights (which anyway, there is no such thing as malay rights!).

this man also praised utusan malaysia for protecting the malays and bumiputera’ struggle,  while attacking malaysiakini and the malaysian insider for disuniting malays.  wow. this means he support all those racist and seditious remarks that utusan had been spewing out because it is against non malays. and to think he claimed he is not racist.

oh well, seeing that they (perkasa) were using the keris as symbol and ikerishim ali love kissing and wielding the keris, utusan malaysia will sure be glad to join perkasa and together, we’ll expect to see more drama coming from them.   LIGHTS,  CAMERA, KERIS!

Malay-based interest group Perkasa launched its first general meeting today at the Putra World Trade Centre (PWTC) in Kuala Lumpur despite being hit recently by major blows to its image.

Last week, the Selangor sultan turned down Perkasa’s invitation to attend the event. 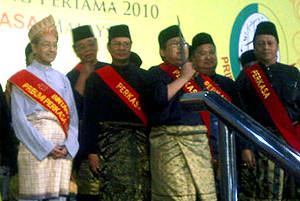 This was followed later this week by snubs from government-linked companies (GLCs), many of whose CEOs also declined to attend Perkasa’s inaugural meeting.

Notwithstanding the setbacks, more than 4,000 people thronged the Dewan Tun Razak Hall 1 at PWTC this morning to officially celebrate the birth of Pertubuhan Pribumi Perkasa Malaysia (Indigenous Malay Empowerment Organisation).

Among them were former premier Dr Mahathir Mohamad (left) and his wife Siti Hasmah Mohd Ali, who were greeted with a silat performance by about 200 members of Perkasa pro-tem president Ibrahim Ali’s Malay martial art school.

Mahathir and Siti Hasmah were accorded the formal Malay traditional welcome, greeted by a deputation dressed in traditional garb with traditional music playing to accompany their welcome.

There were a pletora of keris on show.

A larger-than-life six-foot long replica of a keris stood on the side of the stage, representing the Keris Cempa Taming Sari, often used as a symbol of the Malays and their fighting spirit. The words “Never shall Malays vanish from this world” emblazoned upon it. 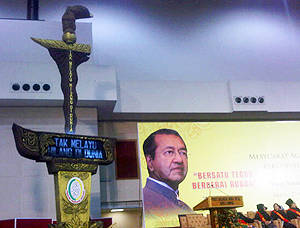 Another giant replica of a keris  (right) – with the words Tak Melayu Hilang Di Dunia (The Malay shall not disappear from this world) written on the scabbard – stood on the side of the stage.

Making up the thousands strong audience was a cross section of Malay grassroots from across the nation, reminiscence of an Umno conference.

Even their chants were the same, cries of “Hidup Melayu” punctuating the points of the speeches. Though this time “Hidup Perkasa” served as a substitute for “Hidup Umno”.

In his opening speech, Ibrahim – who is also Independent Pasir Mas MP – kicked off the AGM with a bang by describing Perkasa as a group that aims to “defend Islam, the special rights of Malays and bumiputeras”.

Ibrahim (left) then hit out at DAP’s ‘Malaysian Malaysia’ and raised the spectre of the May 13, 1969 racial riots.

Malaysian Malaysia “is aimed at seizing the special rights of Malays (and) doing away with the Malay rulers. Its objective is to bring about disturbances and to fracture the unity of ethnic communities in Malaysia,” said the veteran politician.

Ibrahim also lashed out at Opposition Leader Anwar Ibrahim, who he accused of being close to the United States and was among the causes of the current problems faced by the Malay community.

On the other hand, he praised Malay daily Utusan Malaysia for having risen to the community’s defence. Utusan, he said, is the only paper that “protects the Malays and bumiputera’s struggle.”

Even Umno Youth chief Khairy Jamaluddin was not spared Ibrahim’s vitriole for having derided Perkasa as a “rhetoric NGO”. Ibrahim mocked the Rembau parliamentarian as a “newly-hatched politician”.

Ibrahim warned political parties against making an enemy out of Perkasa. Those that do so will find themselves losing at the elections, he said.

‘Malay support for Umno has eroded’

Mahathir, who later exchanged his black songkok for the ‘tengkolok’ head-dress, was next to speak.

“I’m sorry for saying so, but there are many Malay NGOs that have focused on Malay problems because faith towards Umno as their protector has eroded,” said Mahathir in his speech.

According to Mahathir, Umno’s performance in the 2008 general elections was disastrous, and BN only has been able to form a weak government that was unable to promote the conditions of Malays.

“We don’t have to say who this weak leader is, he has already left,” said Mahathir in a jab at former premier Abdullah Ahmad Badawi.

After his officiating speech, Mahathir was awarded the ‘Bintang Pribumi Perkasa’ Award for his stature as a renowned Malay leader.

He was given a sash with the title ‘Bintang Primbumi Perkasa’ printed on it and a ‘tengkolok’ head-dress by Ibrahim.

After the award ceremony, Mahathir handed the Perkasa president’s keris to Ibrahim who proceeded to unsheath, kiss and wave the keris high in the air amidst cries of “Hidup Melayu”.

At the conclusion of the AGM, about 50 Perkasa members marched to the nearby Sentul police station, where representatives from 13 Perkasa state divisions lodged reports against Anwar and PKR secretary-general Saifuddin Nasution.

Arman Azhar of Selangor Perkasawho led the delegation told reporters, “Perkasa is an organisation that defends the institution of the monarchy. We are here to defend the monarchy, because we view Anwar’s actions as betrayal of the royals”.

Citing ex-PKR MP Zahrain Mohd Hashim’s remarks in Parliament earlier this week, Anwar, they said, had ‘used’ the Agong’s name and that of the country’s armed forces chief in his ‘Sept 16’ bid to topple the BN-led government.

“What is the difference between Anwar and any other Malaysian?” he asked, lamenting the lack of action against the opposition supremo for what Perkasa perceived to be slights against the royal 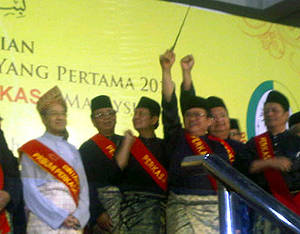 “We want the police to take stern action against Anwar,” Arman added.

While Saifuddin, they said, should be investigated for contempt of court for asserting Anwar’s innocence despite the latter’s ongoing Sodomy II trial.

“The trial is still ongoing. How can they question what is being tried in the courts. Only the court can decide.”

They also claimed that widely-distributed VCDs in which Islamic religious scholar Yusuf Al-Qaradawi had purportedly supported Anwar’s claim to innocence, had actually been edited.

“We found out that specific words were edited out to portray that the Muslim scholar supports Anwar.

“But in reality he does not. We have the unedited video, we have submitted it to the police with our report.”

DAP supremo Lim Kit Siang described Ibrahim speech as “ incendiary” and that Perkasa is “built on stilts of lies”.

“In the 70s, Ibrahim frantically sought my help as parliamentary opposition leader when he was trying to escape detention under the Internal Security Act for his activities as a student leader.

“Why sought my help if DAP leaders were so anti-national and disloyal as he now wants to depict?”