You are here: Home › christian › allah does not belongs exclusively to malaysian muslim 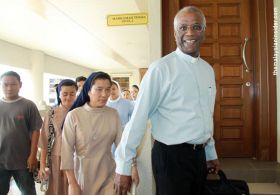 … didn’t i already said that again and again?

so good. the court says yes to the use of allah for the catholic church weekly, the herald (pic here shows the herald editor, fr. lawrence) in the forefront). however, i wouldn’t dare to celebrate yet… because who knows the home minister might appeal to the court of appeal and you know how the court of appeal act (look at how they overturn the court’s decision re: MACC questioning hours).

you know, inspired by the malaysian insider ‘shame of the decade’ i wanted to made a ‘shame of the year’ and what is that you wonder? well the shame of the year is the govt. fighting in court for the exlusive use of the word allah! well, if they appeal, then i will surely made that post.

once on facebook, a friend posted about this issue. he agree allah can be use by the chrisitans, does not belong only to the muslim and you know what, there was one muslim who came out to disagree, arguing pastionately, not forgetting getting vulgar too, that allah belongs to the muslim only and the one thing that strike me is she/he appears to speak for all muslim – when i mentioned that some muslim don’t mind christians using allah – saying all muslim do not want the christians to use allah and this is the best part – “we will die first before we let you use allah”.  whoaa!! i wonder does that sound something like a threat? just like what this brainless umno pasir salak MP, tajuddin said – threatening racial tension?

i labelled him brainless because he asked ““What is their motive (for the suit) ? Why all of a sudden they want to use the word Allah when all this while they have been using the term God?”

good lord, en tajuddin!! the catholic church had all along, many many years back been using allah already. it is not a ‘all of a sudden’ decision.

tajuddin was not alone though. others too had been asking what tajuddin asked so please refer to my response above. then i find many people too missed the issue at hand when they asked this.   daboss, who commented in the malaysian insider explained it well:

Many people are still not aware of the issue at hand.
The issue at hand is the permission of using the word “Allah” in the Bahasa section of the Herald, the official mouthpiece of the Catholics of Malaysia, of which a section of the circulation is distributed in Sabah and Sarawak, which has a large number of native believers like Iban, Kadazan, Bidayuh and so on. As these native are more comfortable with using Bahasa Malaysia, thus the use of the word “Allah” in the bahasa context is necessary, hence the “confusion”. but the authorities should also bear in mind that the word ”Allah” had been in use in Bahasa version of the Bible for a long time already. Also the Muslim should also take note that English-educated Chinese, Indian and Eurasion Catholics of Malaysia will continue to use the word “God” and not “Allah”. It is also pertinent to note that the Bahasa Melayu version of the Bible, which the Malaysian are using now, are produced in Indonesia, the largest Muslim country in the world, and they are circulated among the millions of Christians there without restriction.
UMNO may have a valid point in suspecting that the case may be “politically motivated”, but it doesnt take a expert reader of present day Malaysian affair to see that this is the result of the current govt’s racist tendencies and corruption that prompted even non-political bodies to take advantage of every opportunity to hit back at the ruling parties.

ok it’s new year’s eve so i’m not going to comment further. beside, now i gotta  go for the ‘majlis malam ambang tahun baru 2010’ right in front of our door-steps.  started at 9.30pm and i was there at 9.30 to collect the lucky draw coupon, then i came back home. (where i am now, at home, i can hear the speeches and music). wanted to see the fireworks and of course hope for a prize in the lucky draw. 🙂

below is the news article from malaysiakini. please also don’t forget to read it at UCAN, which was what i wrote.  i managed to contact that 3 persons for their quotes. i try to call others like the lead counsel pores royan, the MCCBCHST and CFM president, the gurdwara association president but no one answer the calls. guess they were all on 1/2 day leave maybe being new year’s eve.

In a landmark judgment, the Kuala Lumpur High Court presented the Catholic Church a belated Christmas present by ruling that the home ministry’s blanket ban on the use of the word ‘Allah’ is illegal.

In making the decision to allow the motion by the Catholic Church to set aside the ban, High Court judge Lau Bee Lan stated that the minister’s order is “illegal, null and void”.

She said that Catholic weekly The Herald can use the word ‘Allah’ and that the term is not exclusive to Islam.

Justice Lau added that the home ministry also failed to substantiate any of its claims of threats to national security which could be caused by the use of the word ‘Allah’ by the Herald.

This overturning of the home ministry’s earlier ban will open the doors for the Catholic weekly and probably other non-Islamic publications to use the word ‘Allah’ as a direct translation for the word ‘God’ in the Malay language versions of their publications.

Justice Lau added that all Malaysians had the constitutional right to use the word ‘Allah’ as guaranteed under Article 11 of the federal constitution which guarantees freedom of expression and freedom of religion and the practice of it.

The Herald editor Lawrence Andrew (pix), met by reporters outside the herald case 311209 father lawrencecourtroom fresh from the verdict, said that he was ‘very happy’ with the decision.

However, he stopped short of calling it a victory, saying instead, “We called out for justice and we got it.”

If it is at all a victory he added, ” …it is a victory for all Malaysians. This shows that we are truly living in a ‘1Malaysia’, not two Malaysias.”

“‘Allah’ is a cherished word, we use in our churches and it is dear to us. It is good that the right to use it has been returned to us,” he said.

However, given the implication of the case, it is likely that the home ministry will appeal against the decision to the higher courts.

Deputy Public Prosecutor Kamaruddin Mohd Said indicated as such when asked by Malaysiakini after the trial, “The court has ruled and we have to respect the decision of the court. However, if it is decided that this issue requires further contention, then we will apply for a stay to the ruling and file an appeal against it”.

He added, “I will have to look at the decision in detail first and consider the inclusion of constitutional rights into the ruling. I will also need to refer back to the home ministry and await further instructions.”

Earlier in court, after the judgement was delivered, Kamaruddin (left in pix below), who represented the government in the matter, argued that it was only valid for Herald’s 2009 annual publication permit and the restrictions on the use of the word ‘Allah’ contained therein.

He said today’s decision could not affect future permits and a new application for a judicial review would have to be applied for to set aside any similar restrictions contained in the Herald’s future permits.

The landmark case, which was supposed to be heard at the Jalan Duta court complex yesterday, had been postponed to today because Lau said she needed more time to consider her decision.

The Home Ministry had invoked concerns of national security and said that the ban was to avert any confusion that could ensue should non-Islamic publications use the word ‘Allah’ as a substitute for ‘God’.

The ministry asserted that ‘Allah’ was exclusive to Islam as a term for the ‘one true God’. Hence, other religions could not use it as a generic term.

The Catholic Church, in filing the judicial review, however disputed this and argued that the word ‘Allah’ predates Islam as a generic term for ‘God’ and has been in use in many places, even in the Middle East.

It said that in Malaysia, the term ‘Allah’ is widely used among indigenous Christian tribes in Sabah and Sarawak.

The church also argued that the ban goes against the principle of freedom of religion and religious practices as outlined in the federal constitution.

The Herald, circulated among the country’s 850,000 Catholics, nearly lost its publishing licence last year for using the word ‘Allah’. The paper is printed in four languages, with a circulation of 14,000 copies a week.

One Response to "allah does not belongs exclusively to malaysian muslim"