You are here: Home › general › politics and morality 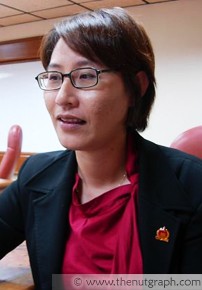 poor elizabeth wong (pic). i hope she will be strong and hold on and not yield to pressure or stress. i had met eli (as she is fondly known among friends) before few years back at one of the bloggers gathering in KL. we just say hi and smile at each other. nice friendly lady.

well by now everybody knows of this news. many bloggers had blog about it already so of course i have to jump in the bandwagon too. unlike some bloggers who are not working (or who work but yet can blog!) i have to blog about it only now, after work and after ‘free’ – my usual after midnight time.

ok so what’s the latest in this issue? if you went to malaysiakini yesterday late night, you’ll notice that almost the whole of front page were filled with news on this issue.

‘nude photo: exco lodged police report’, ‘wong: i was a vicitm’, ‘s’gor MB stands by embattled exco’, ‘pas leader: culprit worst than a prostitute’, ‘police yet to identify person responsible’, ‘gross invasion on her privacy’, ‘stinking to new lows in politics’, ‘she must quit, says khir toyo’ – these all appeared in malaysiakini (at the time of writing this – 17 feb, 0025 hrs).

ahh… of course i have to comment on the last one… because it involved mohd khir botox. (from now on i’ll refrain from refering to him as khir toyol since someone in comments had pointed out to me ‘toyo’ is his father’s name, so not fair to attack his father’s name. anyway it won’t be wrong to say though ‘khir the toyol’ since i’m attacking the same khir).

i wonder how this khir botox can get to be a menteri besar. his grey cells is so dried up. how on earth can he compare elizabeth’s case with MCA’s chua soi lek? he said if chua had to resign, then elizabeth has to resign too. chua’s and elizabeth’s cases are entirely different lah, mr bodoh botox! chua was a married man who had an affair which to us is something wrong. whereas elizabeth  had her nude photo being circulated – a photo of her in bed sleeping. nothing wrong about that!

“This is about morality, whether the pictures were taken with or without consent is another matter, I cannot accept a lawmaker whose morality is questionable,”

what morality were you talking about here, khir the toyol? her nude picture was taken in her house while she was sleeping. don’t tell me it’s wrong to sleep nude in your own home? don’t tell me sleeping nude at home means one has low morality? what if i sent someone to spy on you while you were bathing, take a photo of you bathing nude and circulate it around – this means you have to leave umno because your morality is in question??

such a stupid statement from a former MB! believe it, believe it! who the hell is he to talk about ‘a lawmaker whose morality is questionable’ when what he did during his time as MB was much much more questionable! all the wang he sapu… someone commented in the malaysian insider that he is one of the most corrupted umnoputera!! we will not forget how he build a huge palace for himself when he became a MB!

thank god there are not others as stupid as him to call for elizabeth to resign, like zulkifli sulong, malaysian insider’s columnist who wrote a piece in bahasa, ‘eli jangan letak jawatan’ (eli, don’t resign).

zulkifli mentioned that comments from many blogs and also the malaysian insider itself were of the view that khir botox’s call for eli to resign on the grounds of morality made no sense at all.

these are some of the comments he picked up:

*since when was it an offecne when one sleep naked in her own bedroom.

*she is not married, and not a muslim too.

*comparing to chua soo lek does not make sense at all because eli did not do anything like in chua’s video.

*i think, khir will blame his daughter if his daugher was raped.

*this is his attempt to show that he is the champion in the wake of the coming umno assembly.

i like this the best and had a most hearty laugh over it:

i’m sure, just like the BN leaders in perak, khir will not regret and will not stop his political stance. after this, khir will march again (probably to bukit lanjan) to inform everyone ‘elizabeth wong sleeps naked in her bedroom’.

obviously he was refering to khir’s fondness of leading a march (protest) like what he did in penang (but was stopped) and recently in selangor. oh and if you don’t know, bukit lanjan is eli’s constituency.

NOTEL: photo of eli here taken from the nut graph, another good online news website,  oh and for the full statement from eli, go to a friend,  bob’s blog to read, who btw is a good personal friend of eli.

7 Responses to "politics and morality"