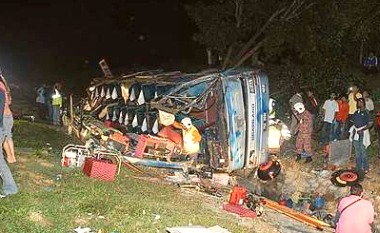 … or rather should i add ‘driver’ after ‘bus’? (read ‘express bus crashes into tree and overturns near tangkak, killing 10’ – picture taken from there)

TEN people were dead, mind you, 10, as in T-E-N – TEN! not 1, not 4… like the 4 dead in the bukit antarabangsa landslide. this deadly bus accident happened less than 24 hours after the bkt. antarabangsa landslide. understandably when the landslide happened, the news was reported all over in the main stream media and online media – on saturday. then the bus accident happened on sunday morning, and i expect to see front-page news of it on MSM and main highlited news online but i noticed that the MSM and online news still highlighted the landslide news.

anyone of you remember the worst bus accident that happened last year? in fact, it was even labeled as the nation’s worst road accidents, mind you. to refresh your mind, it was the bus accident that happened on 13 aug. 2007 at bukit gantang, near taiping, where 20 people were killed. well, as usual, after that accident, just like after the highland towers landslide tragedy, the usual finger pointing began and the usual ‘sing-along’ of "no more permits for bus" or "strignent checks for bus/drivers" "bus to have more safety measures" and so on… but look what happened. yes, NATO – no action, talk only. as you can read from the report here, what were proposed last year, were not put in place at all.

does this means that the government does not place importance on average lower income people (like me!) who travel by express bus. many of us who could not fly by MAS or even air asia, have to resort to the express bus. no choice for us. my mother and sister left for singapore on 5 dec. by express bus and i did worry a little and hope nothing will happen. (and 8 dec. i heard of this fatal bus accident at tangkak!). towards the end of the year, i will be going to KL for holiday and yesterday i had already booked an express bus ticket. gee, i’m taking a risk. what to do. no choice.

ok, back to the recent tangkak bus accident. it was said that the driver lost control of the bus before it crashed and over-turned. hmm… lost control? why and how? analysts had said that an accident occured due to these 3 main factors – human error, vehicle condition, road condition. i wonder, after investigation, which of these factors will emerged for the tangkak bus accidents? (my heading here shows the 2nd factor but when i asked should i add ‘driver’, it shows the first factor. well it could be a combination of more than 1 factor.)

ok before i end, here are the names of the 10 people who were dead. do pray for their souls and pray especially for their families in going through this difficult times.