You are here: Home › announcement › contents of kee’s book

remember 2 days ago i blog about kee thuan chye's latest book, 'march 8: the day malaysia woke up', in which i had a part in it? well yesterday i received the complimentary copy from kee himself, with his autograph of course (thanks mr kee!). i flipped through the book and wow!… looking at the contents, i was mighty impressed! there's so much good reading there. i'm going to start reading the book tomorrow and daily while going to work (in the car, my sister driving lah, so i'm free to read).

to let you in, what the book contain, i had taken the liberty to scan the contents pages and let you have a peep at what you'll expect to read in the book. you'll notice interesting titles with well-known names (contributors) like kua kis soong, anil netto, azmi sharom. 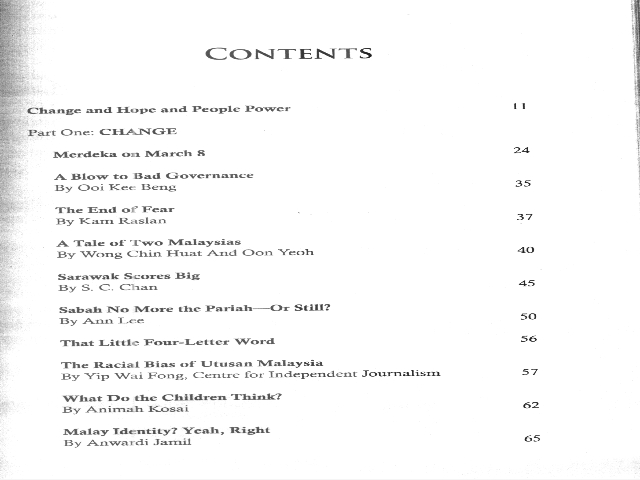 ahh… below, here you see my contribution entitled 'the mother of all ceramahs'
you notice helen ang's name here twice (and another time towards the end). well, i have helen ang to thank for getting me to contribute to the book. she was the one who informed kee (who btw is her cousin) that i can write something about the ceramah since i was there personally. thanks, helen. 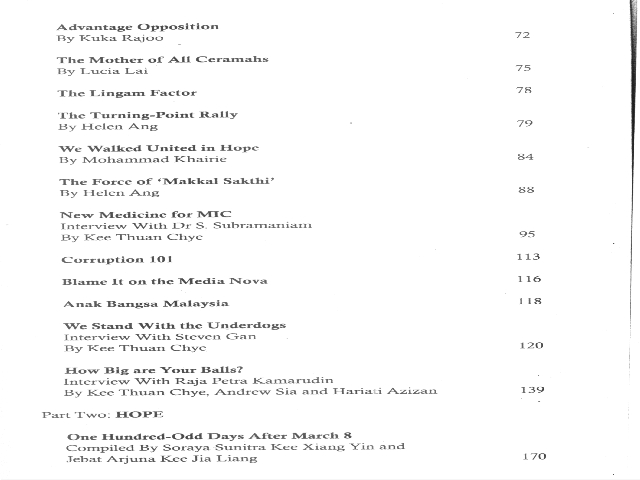 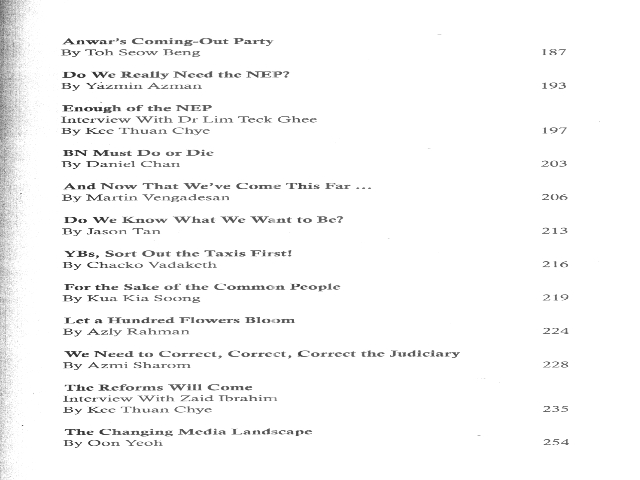 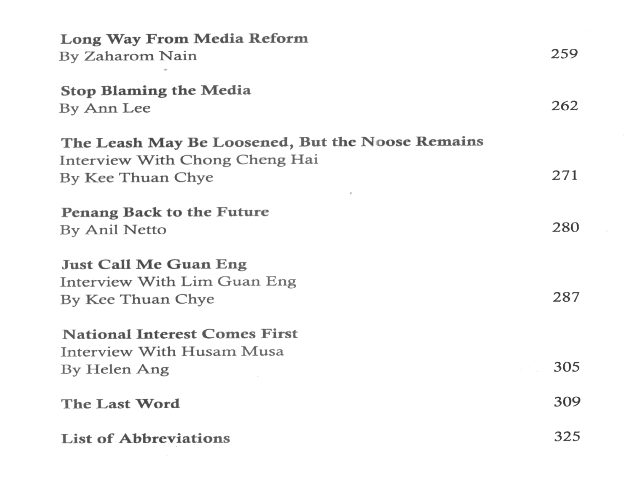 interesting eh? go and grab this book at once! you won't regret i bet you!

oh just found out, there's a mention of this book in malaysiakini after i posted this. i am going to CnP the whole article from malaysiakini here:

Prominent writer, journalist and playwright Kee Thuan Chye, who authored the book ‘March 8: The day Malaysia woke up’, said he would not bet his money on whether there would be a change in government on Sept 16.

He said while some confidantes have told him that this is 99 percent likely to happen, others believe that it will not.

“I would prefer them to show that they can govern and wait for their chance at the next polls,” he told Malaysiakini before the launch of his book in Kuala Lumpur.

However, he stressed that he was not entirely opposed to a new government being formed before the next general elections.

The collection of interviews and contributions from various socio-political observers was compiled following the historic election results on March 8, when five states went to the Pakatan Rakyat coalition.

Kee said the political climate has changed for the better since the general election.

An immediately noticeable difference was the “evaporation” of fear in the collective consciousness of the public to any adverse results following the string of shock defeats of long-incumbent Barisan Nasional candidates.

Despite the shadow of the racial riots of May 13, 1969, Kee said the psychological fear of a repeat of the violence has “dissipated”.

On the current situation, Kee said that Ahmad Ismail – the Bukit Bendera Umno division leader who has stirred up a storm by saying that Chinese Malaysians are squatters in the country – should be charged within the full extent of the law, including the Sedition Act.

Former journalist and TV producer Anwardi Jamil – a contributor to the book – said Umno is “feeling persecuted since it is missing real leadership.”

“Umno is reaching rock-bottom. They are living in denial,” added Anwardi at the event.

Christine Chong, deputy head of publisher Marshall Cavendish, said the book is available in all major bookstores and likely to be distributed across Southeast Asia and India. About 4,000 copies have been sold since its release last week.

“The book records a turning point in the history of the country,” Chong added.

It looks at developments leading to the general election and then at the election itself.

Bersih and Hindraf received key mention, while there are also election analyses and reactions.

“The second half of the book is about hope – about what will happen and how people feel about the future,” Kee said.

He also said he does not have partisan views about any political party, even though some of his own feelings about the country may have emanated in the book.

Saying he did not expect such an electoral change to occur in his lifetime, he added that it is important the people are more active in exercising their rights and participating in civil society issues.

5 Responses to "contents of kee’s book"