You are here: Home › announcement › combating AIDS through religion

tomorrow is world AIDS day. don’t forget to wear a red ribbon in support of the day and in solidarity with people living with HIV/AIDS (acronym to PLWHA).

the theme for this year’s world AUDS day is ‘stop AIDS, keep the promise – leadership’.

with that in mind, on 25 nov,  the community aids service penang (CASP) organised a forum with the above title, to see what roles can religious leaders play to help combat AIDS. the forum was supported by the state government.

i attended the forum which was held at the caring society complex (kompleks masyarakat penyayang). there were about 50 people in attendance.

all participants, after registering, received  a ‘goody bag’. 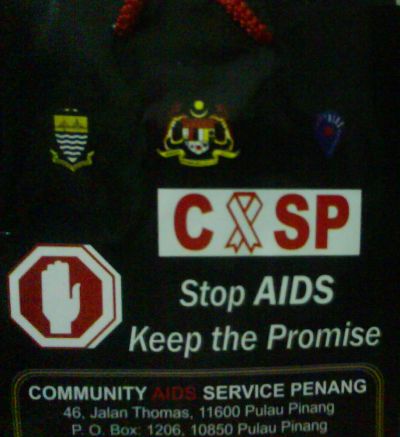 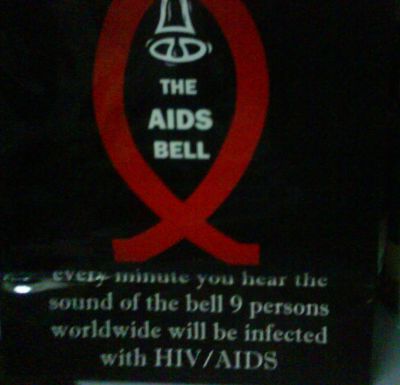 nice bag, eh. front and back of  the bag you see here. there were also wordings on both sides of the bag. one side was listed CASP’s objectives and the other side CASP’s services.

what were inside the bag? several pamphlets, some of which i had came across before. there were also blank paper with pen in case we want to take notes. what i like most from the goody bag were 2 souvenirs, this:

a miniature t-shirt for hanging in your car or any glass surface. the other side of the t-shirt had CASP contact details on it. 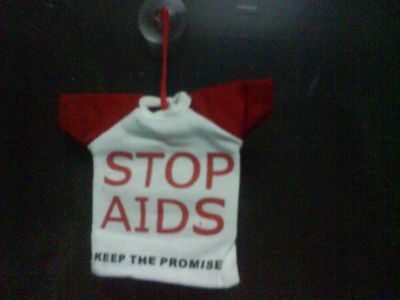 there was also a small metal red ribbon badge (it’s a cuff-link actually but can be used as badge too). cute and pretty. i like this as i can use it instead of using the cloth red ribbon (as in picture right at top).

ok coming to the forum now. the guest of honour for the forum was lee kah choon, MP from jelutong, penang. (for those who don’t know yet. i have taken after politics101, not to put in any titles when mentioning MPs).

the forum began with mr selva,  CASP chairman, giving a short address.  he gave a statistic (forget what year but must be current) of people affected with HIV/AIDS through ethnic groups. seemed that the highest number came from the malays at 72%, followed by chinese at 14%, then indians at 8%, the balance 6%, the lain-lain.  selva also informed that the highest cause of HIV/AIDS infection came from needle sharing (drugs addiction). he ended his address by saying that often it is not the virus that kills the HIV/AIDS victim but the stigma and discrimination.

are you shocked to hear that? don’t be. this is how our society are – people still stigmatise and discriminate people living with AIDS (PWLA). how sad.

lee kah choon was called on to speak next. i was quite sleepy during his speech so i didn’t know what he was talking about. usually assembly man’s speech are boring lah (except dr toh). haha.

lee kah choon left after selva’s speech… together with an entourge! cameraman, reporters, body guards,  i think. mr sing, who was the first person to speak joke that ok now we feel more comfortable after a VIP had left. haha. true.

mr singh was the first person to speak. he was mentioning about how his religion diligently helps everyone in need, so much so that he boasted we could not see any singh beggars around.

the mufti was next to speak and he spoke in bahasa. apart from other stuffs, he spoke on what behaviour to avoid so as not to prevent oneself from getting infected with HIV/AIDS.  he did mentioned something about drug addicts, acknowledging the fact which selva brought up that most  HIV/AIDS victims were drug addicts. i don’t know  why he had mentioned something about islam having issued a fatwa that smoking is haram. smoking doesn’t cause AIDS, right? maybe he meant smoking of drugs. (inhaling).

dr sunny tan gave the shortest speech. he mentioned there is a christian NGO  ‘malaysian care’  that help the poor and needy, which is also involved in the prevention of AIDS.

the buddhist nun spoke next. at the moment i’ll refer to her as rev yen. i heard something yen, len, yang… not sure which. by far, i see her speech was the best. i’ll talk about her speech later.

mohan sham from penang hindu sangam was the last to speak. like dr sunny tan, his speech was short and not too many new things to learn. he talked about people having to change their mindset on their views regarding PLWHA.

ok now rev. yen. she stressed it is important for us not to moralise the PLWHA people. that’s the last thing they want and we will only serve to distance them from us.
she said that buddhists has the noble  8 path to follow as a basic of their teaching regarding those who suffer.
she said that although being a religious body, the help we offered should not be confine to spiritual only but should be wholistic. as religous leaders, she said, they have a role to play by being able to influence people (who are not affected yet by HIV/AIDS) to a change of lifestyle so as to avoid AIDS.

most of the religious leaders who spoke, did talked about education on how AIDS is spread as important since up to now, not many still know how AIDS is spread. there are still some ignorant one who think by hugging and holding hands with PLWHA can spread the virus!

rev yen ended with a very strong point urging us to look to the fact that it is us who should be grateful to the people we help, not the other way round, because they (people we helped) are giving us a chance to show our love and charity – which are what the god of all religion wants us to do.

there was a Q&A session after all had their turns talking. the audience were not really participatory. only 5 stood up to ask questions.

elizabeth thomas, who works in CASP, stressed on what selva had said earlier, that it was not the virus that kills the PLWHA but the stigma and discrimination. sad, isn’t it? she also mentioned something about how their service centre works, one of it being that, they do a lot of counselling to the family of the PLWHA, because more often than not, the family were not able to accept the fact that one of their family was inflicted with HIV/AIDS.

all in all, it was a good forum though i can’t say very beneficial since what most of the speakers said were nothing new actually. it’s just good to hear the perspective from the different religion. CASP was kind enough to give us tea after the forum – time for us to mingle and fellowship. oh… and did i neglect to say all this was FOC? yeah, with the goody bag and tea, nice spacious air-con venue. oh but of course it got to be FOC since this was a project funded by the government. anyway, thanks to CASP for a well organised forum.

5 Responses to "combating AIDS through religion"