You are here: Home › christian › another cartoon crisis? 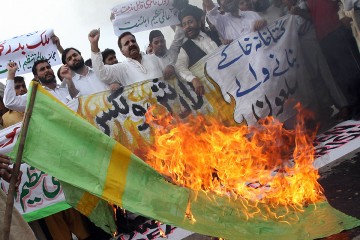 who can ever forget the danish cartoon issue which sent scores of muslim into riot, burning flags and houses and even murder.

the trumpet reported that a sweedish daily had published a cartoon depicting the prophet mohammed’s head on the body of a dog. the trumpet wonder because of this, will another crisis erupted, like the danish cartoon crisis?

Though more than two weeks have passed, and the issue hasn’t yet spiraled into an international incident replete with violent riots and mass chaos, this doesn’t mean a crisis isn’t lurking around the corner. This is not to say Muslims haven’t reacted. Last week the governments of both Pakistan and Iran summoned Swedish diplomats for meetings, at which they lodged formal complaints.

well, already the burning of flags had happened. see the picture here? it shows pakistanis burning a sweedish flag on 31 aug.

in our country, we had the recent incident where makkal osai published a picture of jesus holding a beer and a cigarette. it’s a pity that up to now, we heard nothing from the government or makkal, which means to say the one month suspension stays. so sad, that this had to happen on our golden merdeka time.

i read at bob’s blog that a kind of similiar controversy that parallel the makkal osai issue happened in australia not long ago.

One of the entries was of an entry by artist, Luke Sullivan, which was a statue of the Virgin Mary with the head of the figurine wrapped in a burqa titled "The Fourth Secret of Fatima" (see picture on the right). The other was a work by Priscilla Bracks entitled "Bearded Orientals: Making the Empire Cross" which featured a holographic portrait with a picture of Osama bin Laden and Jesus Christ on flip sides that seem to morph into each other (see picture below).

The loudest howls of outrage and protest naturally came from politicians, including Australian Prime Minister, John Howard. He was reported to have described these works as being "gratuitously offensive to the religious beliefs of many Australians".

ain’t no surprise eh to read that the loudest protest came from politicians… or those involved in politics, like the makkal osai issue, it was the political party, MIC that made the loudest noise.

what was most interesting in bob’s post was the reaction of the most affected – the christians. hop over bob’s blog to ready, ya. i would like to highlight what one anglican bishop said:

"Christians are not about to go and kill people because someone did some cartoons – it’s not the way we respond,"