You are here: Home › general › MCLM pushes for the rakyat reform agenda (RaRA)

NOTE: i had written this somewhere end of oct. i attended the MCLM forum on 24 oct. and wrote based on what i heard. i sent what i wrote to komunitikini, thinking it would be published but alas, what a disappointment, it didn't. so then i was thinking i will publish it in my CJ.MY blog, 'reflection' because, like komunitikini, it is under malaysiakini too,  but disappointment again… the CJ.MY blog is not working well. i can write a post but i can't publish it! gosh! double disappointment from malaysiakini. so since it had already been written, and not published, it will be a waste of my effort, so i'm now publishing it in my own blog. well today is 11.11.11 – so i have to blog something today!

The Malaysian Civil Liberties Movement (MCLM) organized a Road-show to explain to the people what is the Rakyat Reform Agenda (RaRA).

On 24 Oct., MCLM was at the Balai Rakyat Bayan Baru, Penang. About 40 people attended the forum. The invited speaker was Datuk Dr Joseph Kitingan. The other two speakers were Haris Ibrahim, president of MCLM and Jayanath Appudurai of Saya Anak Bangsa Malaysia.

According to MCLM, Malaysia can be a great inclusive nation if Malaysia return to basic principles. These principles are found in the four pillars of  the RARA, which are as follows:

Datuk Jeffrey Kitingan spoke on the first RARA pillar – the Malaysia Agreement, 1963 and the 20-point agreement. His presentation was aptly titled ‘From equal partnership to takeover’. He presented the facts about the agreement and then shocked the participants on how the agreement was not honoured.

Datuk Jeffrey first explained the facts of the agreement and later on, on how the terms of the agreement had not been complied with. The non compliance had a strong impact on the state of Sabah and the lives of the people living in Sabah.

“Sabah was cheated and became a subservient state.” said Datuk Jeffrey, “As you know, Sabah is now the poorest state in Malaysia. It was only after March 2008, that we see emerging political maturity in Sabah and Sarawak.” 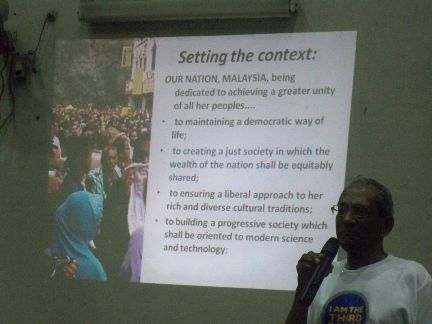 The fourth pillar of the RARA on the Social Inclusion Agenda (SIA) was explored by Mr Jayanath Appudurai. The SIA is, Jayanath explained, basically a comprehensive program to address the economic and social needs of the poor and the marginalized, including migrants.

“For over 40 years, NEP has failed to address the real cause of poverty and inequality. 40% of Malaysians fall under these groups… they are the marginalized rakyat. They face a bleak future. SIA hope to solve these problems.” 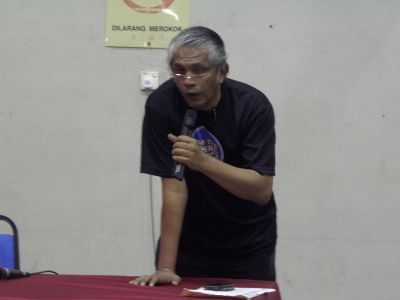 Haris Ibrahim spoke on the other two pillars (2nd and 3rd) briefly.

“The National Institutions like the Judiciary, Election Commission, Attorney General, MACC need to be restored to the Rakyat, to serve the Rakyat. Right now, the institutions seems to be serving their political masters.” informed Haris, “For example, the judges are pro-BN, and if PR get into Putrajaya, they will elect judges that are pro-PR – but we don’t want that. We want judges that are pro-rakyat.”

On the third pillar, about restoring the liberties guaranteed to the Rakyat, Haris explained that this means laws like ISA, OSA, PPPA, UUCA and the Sedition Act should be repeal. These laws should be repeal so as to give the rakyat more freedom, he said.

“MCLM serve the 40% marginalized.  The only way to do that, is to remove BN and install a government that will reform the 40%.” continued Haris.

MCLM was launched in London on 30 October 2010 and its chairman is Raja Petra Kamarudin. To find out more on MCLM, please visit its website – http://mclm.org.uk/