You are here: Home › penang › youth parliament and electoral reform/BERSIH

UPDATED 10/12: my article on the youth parliament at UCAN:
http://www.ucanews.com/2010/12/08/church-backs-malaysias-first-youth-parliament/ 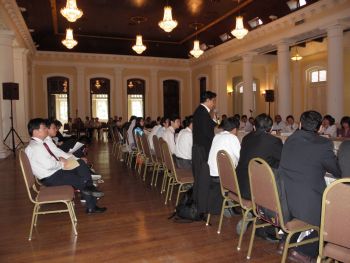 the first and second of the local democracy week events in penang, which i attended. first – on 6 dec, the youth parliament and second – on 7 dec, the forum on ‘rakyat‘s demand for electoral reform’ and launching of bersih 2.0.

for the youth parliament (first pic) see my report in UCAN. it was a good ‘parliament session’.  i saw the report in the sun and malaysiakini too. i already have all the photos i took up in my facebook album.

here are the 11 demands from the rakyat for electoral reform:

1. complete revision of the electoral roll to ensure that the existing irregularities are removed and a roll with full integrity is in place.
2. The use of indelible ink (as is done in Indonesia and India) to prevent multiple voting.
3. The reform of postal voting to abolish the existing separate electoral roll for postal voters and to make it flexible for all voters, at home or abroad, with valid reasons to opt for postal voting.
4. Free and fair media access for all contesting parties, which should include: (a) free access to state-owned media especially television and radio; (b) fair paid access
(political advertisement) to private media; and (c) provision of the right of reply for all contesting parties and personalities who are covered negatively in news reports. 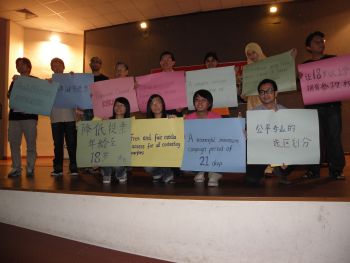 5. A meaningful minimum campaign period of 21 days.
6. Fair and professional practices in constituency redelineation exercises to minimise malapportionment, gerrymandering and consequent disproportionality in seats and votes.
7. Automatic registration of all eligible voters.
8. Reduction of the voting eligibility age from 21 to 18 years old.
9. Reform in electoral financing to ensure transparency and limit the influence of money politics.
10. Administrative neutrality of all levels of governments before, during and after general and by-elections for the federal and state legislatures.
11. Affirming the right of all students of 18 years and above, to participate in politics inside and outside campus