You are here: Home › general › penang should ban parasailing 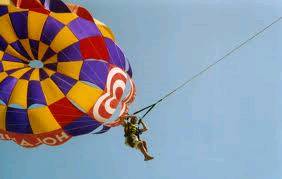 … or any other dangerous water sports  at the beach.

on 31 dec, there was an incident at one of the beach in penang about a japanese girl who suffered laceration on her neck after a parasailing rope got hooked on to her neck. this for sure was not the first accident that had happened to tourists or locals on the beach concerning water activities.

a friend, andre loh, informed that in june 2010, he himself had witness (and involved) in a near parasailing accident. here is his story in his own words.

From a distance I could see a parasailor and her attendant motorboat proceed towards the beach. Sensing danger, I became extra vigilant. Within 2 minutes, her parasail swooped above us but the wind carried her beyond the landing zone (a common occurrence).  Instinctively, I rushed and put my right foot on the rope, thus averting danger.  If I had failed to react correctly, the rope would have swept many, many children off their feet.  Adults too. The boatmen did the same thing but he only arrived about 20 seconds later.

Parasailing in Penang represents a CLEAR AND PRESENT DANGER. It is VERY POSSIBLE that Children & adults will die because of Parasailing. This is because:-
i)  Penang’s  BEACHES Are TOO NARROW & short for parasailing.
ii)   When the tide is UP, the beach is HALVED, thus making safe  landing very difficult.
iii)   The wind being unpredictable, makes Parasailing EVEN MORE DANGEROUS.
iv)    Many parasailors are first timers and can panic when they find it  difficult to steer the parasail.
v)     The Motorboats encroach TOO CLOSELY to bathers.
vi)     The outboard motors spew fuel/oil mixture which pollutes the sea and can cause serious skin allergy to bathers. On a daily basis.

Incidentally, my son had a very serious skin reaction that day after coming into contact with the sea water.  He had to be admitted to a nearby clinic for a few hours for immediate treatment & observation.

It is a FALLACY that parasailing draws tourists to Penang.  What DOES draw tourists back to a holiday destination is its people, their culture and how cultured the people really are.  We have to disambiguate between the perceived wants of citizens and their true needs.  Let us put our RIGHT feet down.  And say NO TO PARASAILING IN PENANG. “WE MUST REJECT PARASAILING & RETURN BEACHGOERS THEIR RIGHTFUL FREEDOM”

========================================
i understand that the penang state govt. is going to ban horse riding and beach buggies soon this year but that’s about it, they said… no blanket ban on all other water sports.  water scooter riding and parasailing would be allowed but under enforcement and strict regulations.  the malaysian association of hotels penang chapter chairman,  marco battistotti said when these activities were properly regulated, the operators would have to abide to safety measures.

“Such regulations are in place in Europe, Thailand, Bali (Indonesia) and Egypt. I think the authorities would regulate them by making the designated area for water-sports larger instead of narrowing it to a smaller area.”

but this is malaysia. malaysia is not known for enforcing regulations. yes i would support water sports if the activities are properly regulated and enforced… but will the authorities see to that? it’s easy to come out with rules and laws but to enforce them, authorities will tend to be lackadaisical. well yes, in the beginning they will be very hard-working but as time goes by, they might not care anymore (like case of ‘new broom sweeps clean’, you know). so i guess the better solution is to ban water sports activities, especially the dangerous ones like parasailing.

One Response to "penang should ban parasailing"