You are here: Home › news › UMNO samseng in action (including a minister) 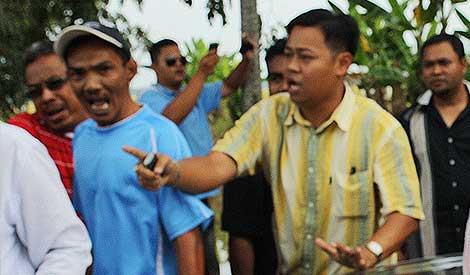 that minister is the agriculture and agro-based industries minister and umno selangor chief.

DAP assemblyman ng suee lim,  from sekinchan when he went into tanjung karang to settle some dispute regarding padi field, about 30 umno samseng (hooligans) assaulted him.

noh omar, the tanjung karang umno division chief even gloated over the attack, saying deserved it. he was heard to say:

“You tell that Sekinchan assemblyman, jangan kurang ajar (don’t be insolent). Jangan datang ke kawasan orang lain (Don’t come into someone else’s territory). He can go and take care of Sekinchan himself,”

i wonder what is the kurang ajar one.

anyway noh denied those were umno members and had accused ng of this and that instead. well, you read the article from malaysiakini (below) and judge for yourself.

it seemed that a few days later ng landed in the hospital because of the assault.

of course noh was not remorseful. instead, he came in to justify the assault! do you know what he said?

“Since police warnings wasn’t adhered to by the state assemblyperson, the people also figured that they can take the law in their hands.

wow! how nice, if you break the law, then i can also break the law.  defending them for the assault, see. imagine a minister with this kind of mentality.

why was he mad at ng and some DAP members for holding demonstration (which anyway ng denied)? everyone has a right to hold demonstration, right, as long as it is peaceful?  so why get mad at ng to the extend of assaulting ng? oh, he said ng was enroaching into his territory. gosh, yes he sounds like a gangster defending his turf.

ok you read the article from malaysiakini and you judged for yourself who’s right and who’s wrong but whatever it is i feel noh was wrong to justify a wrong with another wrong!

Sekinchan rep caught in a scuffle in Tg Karang

A scuffle broke out between several villagers and Sekinchan assemblyman from DAP Ng Suee Lim when he tried to visit a padi field to investigate a dispute.

In the late morning incident today, Ng was allegedly surrounded by a group of about 30 men, whom he claimed were Umno members, when he was meeting some padi planters in Sawah Sempadan Tanjong Karang who had complained that they were being shortchanged by the federal government.It is understood that their complaint was targeted at Padiberas Nasional Berhad (Bernas), a government agency to regulate the rice industry, which they claim has been buying the padi stocks at a much lower price.“As soon as I got out from the car and shook hands with three farmers, I was surrounded by people I suspect to be from Tanjong Karang Umno. They tried to chase me away, saying that this is not ‘my area’,” Ng said in his police report obtained by Malaysiakini.He also claimed in the report that he was punched in the head and arms, and kicked in the stomach.After several minutes of heated shouting and an intense scuffle, Ng and his entourage quickly got back into their cars and drove straight to the Kuala Selangor district police headquarters.Minister: ‘Jangan kurang ajar’The Tanjong Karang Umno division chief Noh Omar – also the Agriculture and Agro-based Industries Minister and the local MP – was, however defiant and did not deny the incident.In fact, he said that “Ng got what he deserved for coming into someone else’s territory”.“You tell that Sekinchan assemblyman, jangan kurang ajar (don’t be insolent). Jangan datang ke kawasan orang lain (Don’t come into someone else’s territory). He can go and take care of Sekinchan himself,” said Noh when contacted by Malaysiakini.

He also claimed that Ng had wanted to “demonstrate” in the area, but without a police permit.“The police also told him to leave but he was still stubborn. He just wanted to come and look for trouble in the area. Of course the villagers would be angry with him,” said Noh (left).He also defended Bernas, 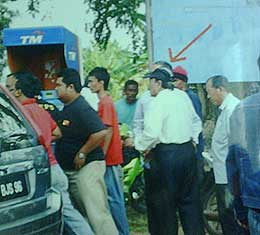 an agency which comes under his direct jurisdiction, saying that the matter had been “resolved” with the farmers.“I already had a dialogue with them last Sunday where I sent my representative to meet with the 300 farmers. We have solved the problem and it is a non-issue now. So why is DAP coming to Tanjong Karang still?” said Noh.When asked about the all

egations that it was Umno members who had assaulted Ng, Noh called the claims “bullshit” said that Ng is merely politicising the issue and pinpointing the b

lame on others.However, he did not deny the claims.“Not everyone in Tanjong Karang is an Umno member. But of course we have our own supporters there. If not how can I win in the elections there?“So this is my advice to Sekinchan. Don’t be a hero in my area. If he dares, come and dialogue with me,” said Noh.

Selangor Umno chief Noh Omar said that the assault on Sekinchan state assemblyperson Ng Suee Lim was justified because the latter was attack for violating the law.

“The people knew that the he was demonstrating without a permit and although the police warned them not to protest, they went on. The state assemblyperson did come alone but 30 to 40 of his people were already there.“Despite being advised against the demonstration he (Ng) didn’t want to listen and broke the law. The villagers thought, since the state assemblyperson was breaking law, why can’t they?” Noh, who is Tanjung Karang MP, told reporters at the Parliament lobby today.Ng was warded for concussions on Thursday after he was allegedly assaulted by 30 men at Sawah Sempadan which borders the Tanjung Karang parlimentary constituency and the Sekinchan state constituency.Denying that he was there to demonstrate, Ng said that he was at Sawah Sempadan to investigate a dispute between paddy farmers and Padiberas Nasional Berhad (Bernas), a federal government agency tasked to regulate the rice industry.

However, Noh insists that Ng and his cohorts were there to demonstrate and encroaching into his ‘territory’. Thus far, there is no evidence of a demonstration.

‘Result of breaking the law’Noh said that DAP would hold demonstrations during every paddy harvesting season and he was certain that a demonstration would be held on Nov 4. He said that villagers were also questioning why there was a need for a demonstration when Ng was already invited for a dialogue.

“Since police warnings wasn’t adhered to by the state assemblyperson, the people also figured that they can take the law in their hands.“This is the DAP way. When they break the law, they forget (the country has laws)… but when the villagers break the law and beat them up then he (Ng) remembers that we are all governed by laws,” he added.Moreover, Noh said that although his political secretary was at the scene at that time, he was unable to control the crowd. Noh, who is agriculture and agro-based industries minister, also challenged Ng to a dialogue to resolve the paddy issue instead demonstrating.

DAP’s Sekinchan assemblyperson Ng Suee Lim today hit out at Tanjung Karang Umno division chief Noh Omar, who is the agriculture minister, calling him a thug with a “kampung mentality”.

Ng (centre in pic), who suffered a concussion from analleged attack by some 30 men in Sawah Sempadan in Noh’s constituency four days ago, said it is his duty as a Selangor assemblyperson to visit and listen to the grouses and needs of all of the people in Selangor, regardless of the location. “As an elected representative, even if I am from Sekinchan I give concern to all areas in Selangor. Noh Omar said I went into his area, so I was assaulted,” he said at the Selangor state assembly after the tabling of the 2011 budget.

“I was going as a Selangor elected representative, so it is compulsory for me to listen to problems from all of Selangor.”When contacted earlier byMalaysiakini, Noh had told off Ng, saying jangan kurang ajar (don’t be insolent) and jangan datang ke kawasan orang lain (don’t come into someone else’s territory).Ng countered that there is nothing to stop him or any elected representative from visiting other areas, especially if it is to help the constituents.

“Where in the federal or state constitution does it say that elected representatives cannot enter certain areas? If that’s the case, YB Azmin (Ali) cannot go to Galas to campaign.“Even (Selangor opposition leader Dr Mohd) Khir Toyo constantly visits Sekinchan to help my constituents and I welcome him, there is no problem.“This is a borderless world, state assemblypersons and MPs also have no borders. The only border is Noh Omar’s kampungmentality… he is a kampung minister who brings a kampungmentality,” said Ng.‘Umno practices a culture of violence’Ng went further to allege that Noh’s reaction to the assault and the violence by the 30-odd people, who he claims are Umno Tanjung Karang division members, are a direct manifestation of Umno president and Prime Minister Najib Abdul Razak’s declaration of laying down their lives to defend Putrajaya.

“Najib at the Umno general assembly said they are willing to sacrifice their lives to defend Putrajaya… the message is to use violence to attack Pakatan Rakyat elected representatives, this is what they practise,” he said.PKR vice-president and Selangor backbenchers whip Azmin Ali meanwhile urged the authorities to take swift action over this incident, saying it shows disap“On behalf of the assemblypersons, especially from Pakatan Rakyat in Selangor, we strongly condemn this act of thuggery brought by Umno leaders.

“Ng has filed a police report and provided clear proof that there were senior Umno leaders involved, but until today no action has been taken by the relevant authorities.“I hope the police can act professionally in this issue, so that such incidents of assault against elected representatives are not repeated… Umno leaders should appreciate the service rendered by the Sekinchan assemblyperson to help farmers who are facing problems.”

read some of the comments here.