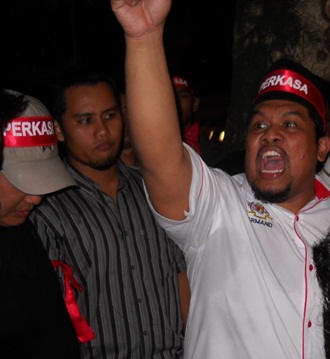 and what a laugh they called themselves malay warriors!! rotfl! (reference this malaysiakini article, which will be CnP below).

perkasa is now harrasing namewee! (after the leader have no guts to face nurul izzah). about 50 of them were protesting outside the selangor chinese assembly hall where namewee was speaking at a youth forum.  then the next day perkasa, self proclaiming them as malay warriors suddenly declared war on namewee (read the article below).  wahh… they have nothing better to do than to harrass a young man… a young man who was only speaking out the truth (albeit in a rude, profane way).

“We accept news (of his tour) with open arms. If he performs inside (a hall), we will ‘perform’ outside too,” he said when contacted today.The young performer will kick off the tour tomorrow at the Chinese NGO Dong Zong-owned New Era College in Kajang.About 50 Perkasa members yesterday protested against the album outside the Kuala Lumpur Selangor Chinese Assembly Hall.They held Perkasa banners and a Malaysian flag while burning posters of Namawee.

The group had urged that the rapper apologise to Malaysians for “disrupting racial harmony”.Namewee, whose real name is Wee Meng Chee, however said this is not the issue as he was there to “address racism”.

He also said that he is not afraid of Perkasa and believed that the police would protect him.But for Arman Azha (left), Namewee is a “coward” and is not owning up to what he has done.“If he was so brave why didn’t he step out yesterday?…If he is trying to act like a Tionghua hero then why did he not have the guts to face Malay warriors last night? We only wanted to talk,” he said

He added that the Johorean could only hide behind his Youtubeaccount, and that he hopes to hide now behind the police and the electronic media.“(The video) had disrupted racial harmony. Who made the video? He made a mistake, so why hide behind police?” he asked.

mob1900 This is a ploy to throw Namewee into lock-up. You know the drill, Namewee will be charged for ‘causing disharmony among the races’ while PERKOSA goes on rampage and spared from any offences. Remember Teresa Kok and the SinChew reporter’s case in 2008?

7 minutes ago · Report
Anon Eh Pahlawan Arman, put yourself in his shoes. Would you dare to face 50 people with madness in their face and mind alone? You can if you’re a movie star like Bruce Lee, Jet Lee or Jacky Chan. But in real life, no matter how good a fighter you are, you’ll be swarmed and over-powered by 50 mad men. Don’t talk bull.
DOC Pekasa has taken racism to a new dimension. An openly racist party, Pekasa declaring war on an individual for being a racist. It like the Klu Klax Clan claiming that Martin Luther King is racist and his racist principles are directed against the Klu Klax Clan or that Hitler is protesting that the Jews are racist but the nazi’s are not.
Anonymous PERKASA you did not come ther to talk did you? Its you who are hiding behind the veil of racism and causing racila discontent
MySecret ehhh … more like mat rempits, drug addicts, malay wannabe’s, and ofcourse the usual umno crony/goons frothing at the mouth. This is the ‘type’ of malays that umno advocate in order to subjugate their own race. Malaysians know what to do when the time comes.
Matrix This moron Perkasa dude think Namewee stupid ar?? 50 of them hoodlums and gangster waiting outside…”we only wanted to talk”. Yeah right.
dingy Namewee against 40000 Perkasa members. What a joke. Let the public be the judge. Who disrupt racial harmony, namewee or Perkasa?
Croniq This is getting weirder by the minute. A group of racists going after a racist for being racist by being racist. Wtf?
foodforthought I am a MALAYSIAN, I DO NOT need Namewee to apologise to me. Perkasa, please crawl back into umno-bn’s arse hole and STAY there.
up yours An openly declared criminal intimidation?
Anonymous Perkasa to protest against Namawee, and the reason is Namawee’s racialist intonation? Kelakar betul Perkasa ni.
Anon These bunch of Malays are really, instead of progressing, regressing. They want to play heroes, a childhood’s dream perhaps, to be Panglima and hulubang. Maybe they watched too many Hong Kong periodical drama about loyal warriors and heroes back in the old China. They may be wanting to emulate these dramas. Grow up, please, grumpy old man, Ibrahim Katak. You really remind me of this movie GRUMPY OLD MAN!
Anonymous The fact that these Perkasa idiots have the time and energy to tail Namewee through out his tour speaks volumes about their purposes in life. Can’t they do something more productive like find a job instead of huffing and puffing around like mindless tin kosongs?
Anonymous Perkasa you all started racism and now you blame others . Infact you PERKASA are very vocal in racism statement and it meants trouble with many press release and making police report for all slightest issue. You all bring religion to front your issue and its really caused disharmony among races .What are you all really aiming for ??????
Logic Can someone enlighten me “WHO IS ACTUALLY DISRUPTING RACIAL HARMONY”????? Or did he say PERKASA harmony…? Bunch of goons are actually stirring racial tension, also being dangerous by torching pictures and now they want to be hulubalang….with the full escort of the police. If candle light vigil is seditious than what you call this…? I think all the Mata Sepet and Kaki Botol should go out there and protect Namawee from this hulubalangs…!
Mikey Did Namawee pay you guys to publicise his album? Perkasa guys are a sure bunch of losers. Not very smart