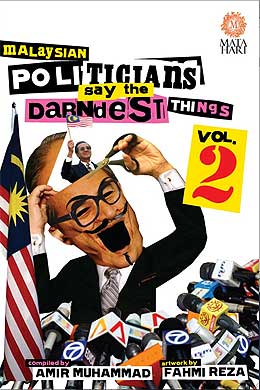 LOL. yes that appears to be the work of the police nowadays, the ‘book police’ as malaysiakini so nicely put it (which inspire me to come out with this heading. translated in english it is “police:  ‘seize! seize! seize the book!”).

the latest action by the ‘book police’ was on amir muhammad’s book ‘malaysian politicians says the darndest things (vol 2)’. the polis buku… or mata-mata buku sounds better… the mata-mata buku seized 9 of these books by amir.

remember earlier the mata-mata buku seized 114 books published by kinibook, a subsidiary of malaysiakini.  the books were ‘where is justice’ and the cartoon book ‘1funny malaysia’  by zunar.

why were these books seized? according to malaysiakini:

It is understood that the books are being studied for any seditious content that could compromise harmony.

wah! why the mata-mata so hard-working and so free to study the books? why they no study perkasa instead? umno? why can’t they seize ibrahim alil or nasir safar   instead of books to check that they are being seditious and might cause disharmony in the country?

oh well, welcome to bolehland where books can cause disharmony…. or even maybe threat to national security – uh oh. ISA for the books?