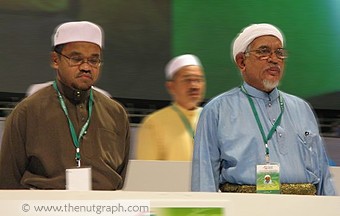 … so why is the newly elected deputy president, nasharudin still insists on one? not only that, it looks like he showed disrespect to tok guru when he said that tok guru, nik aziz’s view does not represent PAS.

oy nasharudin, how long have you been in PAS? how old are you? don’t you know tok guru is your spiritual leader?

nasharudin keep on saying that unity talk does not mean PAS will join umno and that they all (PAS) should be open to talk with other parties too.

“It’s not about sharing power with Umno, not about joining Umno. It’s just about discussion on current issues for the benefit of the people and the nation,” Nasharudin said at a press conference after PAS’s 55th muktamar ended today.

huh? why do you need to talk to umno on current issues that will benefit the people and the nation? if you put it that way, it looks like you want to co-operate with umno!! you as a party itself, and not forgetting as part of pakatan rakyat (PR), should be able to handle and solve current  issues yourself.

“We think that as a major political party, PAS can contribute,” he said in response to a question that Prime Minister Datuk Seri Najib Razak was “open” to the idea but wanted PAS to articulate the concept more clearly.

well it was not only tok guru who said there should be no talk at all but many other PAS members and oh and also perak’s MB (the legitimate one), nizar. khalid samad, the shah alam MP, was very adamant that there should not be any idea of forming a unity government or even a talk, as he reminded PAS delegates of what umno did to perak – the unlawful take over of the government led by none other than our present PM.

“Do not even mention about forming a unity government or holding talks with Umno as both parties have very little in common.”

Khalid said this when debating the motion on the setting up of a royal commission to investigate the Perak power grab which was engineered by Umno.

“Such a commission is vital to unmask all the Umno and BN wrongdoings in Perak. They had seized the state government which was lawfully elected by the people,” he said, adding that he gave his full backing to the motion.

Khalid also stressed that even though Umno embraces the same religion and race with PAS, they “did not care about us when they seized the lawful state government in Perak”.

yep! many of us were very angry at the perak’s illegal takeover by umno and to think that PAS, whom we had elected wanted to work with umno??

“So don’t you mention beautiful words like unity, or making peace, because this will only lead to a split in our cooperation with (Pakatan Rakyat),” he said.

yes, there is also the PR to consider. PAS had formed a coaltion with DAP and PKR and if they want to talk with umno, just imagine how DAP and PKR will feel. talk with your friends first lah before talk with your enemy. oops. i mean talk with your friends and not with your enemy. have good dialogue and rapport with DAP and PKR – that is more important then “we’ll talk with umno but that doesn’t mean we will join umno”. if you already agreed umno is your politcal enemy and you won’t join umno, what’s the point of talk with umno? unless… it is as a delegate said… there is a hidden agenda… a personal one… of nasharudin or the one who started it all – the president, hadi awang. (picture above shows nasharudin on left and hadi on right).

PAS should take a vote to see who is in favour of the talk with umno and i’m sure many would have voted against it. they should all listen to the wise old man, their tok guru, nik aziz.

One Response to "tok guru said no unity talk…"