You are here: Home › government › ‘allah’ comes under the survelience of ISA 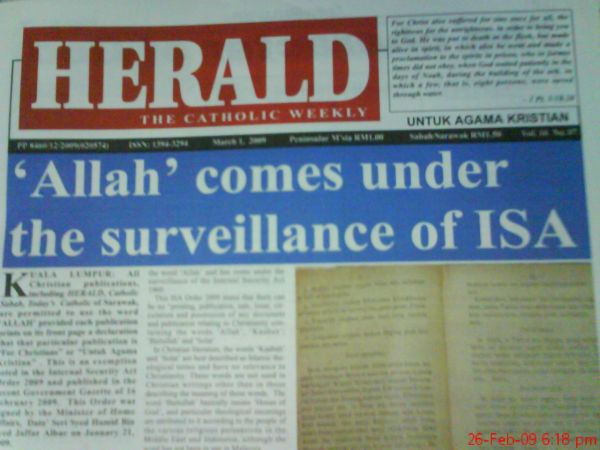 The Herald, issue 1 March 2009
‘Allah’ comes under the survelience of ISA.

Kuala Lumpur:  All Christian publications, inlcuding Herald, Catholic Sabah, Today’s Catholic of Sarawak, are permitted to use the world ‘Allah’ provided each publication is ‘For Christian’ or ‘Untuk Agama Kristian’. This is an exemption noted in the Internal Security Act Order 2009 and published in the recent Government Gazette of 16 February 2009. This order was signed by the Minister of Home Affairs,Dato Seri Syed Hamid Bin SyedJaafar Albar on January 21, 2009.

Many will heave a sigh of relief that at last we are free to use the word of Allah, a word that has been in use in our Church life and worship for more than four centuries. Unfortunately, the apparent relief that we imagined were were able to enjoy has been short lived! For this Internal Security Order, which is ‘cited as the Internal Security (Prohibition on use of specific words on documents and publication) Order 2009, is first and foremost a prohibition in the use of the word ‘Allah’ and has come under the survelience of the Internal Security Act 1960.

The ISA Order 2009 states that there can be no ‘printing, publication, sale, issue, circulation and prosecution of any document and publication relating to Christianity containing the words ‘Allah’, ‘Kaabah’, ‘Baitullah’ and ‘Solat’.

In Christian literature, the word ‘Kaabah’ and ‘Solat’ are best described as Islamic theological terms and have no relevance to Christianity. These words are not used in Christian writings other than in those describing the meaning of the words.. The word ‘baitullah’ basically means ‘House of God’, and particular theological meanings are attributed to it according to the people of the various religious persuasions in the Middle East and Indonesia, although the word has not been in use in Malaysia.

The use of the word ‘Allah’ however, is not new to the Church in Malaysia. We have been using ‘Allah’ for centuries. So have Catholics who use Malay prayer books of more than one hundred years, which contain the word ‘Allah’. Malay was already the popular language of the Church in Malaya before the turn of the twentieth century and prior to the colonization of our country Malaya by the British.

Note: the caption under the picture of the brown book read ‘Two pages from an 1894 prayer book used in Malaysia’ and that 2 pages contain the word ‘Allah’ here and there).

the nut graph -: christian publication can use ‘allah’

the malaysian insider – christians can use ‘allah’ in print but they cannot say it.

and now read my comments. 🙂
(while i await your comments)

then why is the mere use of a word can be classified under the dreadful ISA?? the news article mentioned the ‘ISA Order 2009’ which, you can see, was created only in 15 feb. 2009. why another law come in? read especially from the nut graph what 2 lawyers said regarding the use of ISA. an excerpt, the last 2 paragraphs:

Syed Hamid issued the order under Section 22 (1)(c) of the ISA, which allows the minister to restrict publications "calculated or likely to lead to a breach of the peace, or to promote feelings of hostility between different races or classes".

"I don’t know what the Home Minister has seen, but I can’t see myself how [such publications are] likely to cause such a breach of the peace," Shanmuga said.

crazy, right? absolutely! using the word ‘allah’ which does not belongs exclusively to malaysian muslim, will breach the peace of the country. real crazy! :mad

the restriction that all chrisitan publication comes with the words ‘untuk agama kristian’ (for christians) is really silly. as if a muslim who happened to pick up the herald (or any other christian publication) and saw those words, will not touch it at all? ok or let’s say a muslim pick it up and read it, as if just by reading it, s/he can suddenly want to convert to christianity? this is the mantra that i had been repeating all the time non stop – that this action only serve to tell us how insecure/weak muslim are of their own faith!!

fr. lawrence, editor of the herald, i think mentioned something about the church imports a lot of bibles and publications from indonesia and indonesia christian publication uses the word ‘allah’ freely – don’t tell me that once those publications are in malaysia, they must make sure to print on the cover ‘untuk agama kristian’?

Andrew also said that this new regulation may have stifling effects on other Christian periodicals and reading material for Malay-speaking Christians.

"What about other publications? We are a universal church. Our reading material comes from all over the world," he said.

He added that many Malay-language publications related to Christianity are imported from Indonesia, where no such prohibitions exist.

ok since i declined to comment on the arrogant son-in-law, i will comment on another arrogant young man – from PKR – zulkifli nordin, the same fanatic person who was the leader of the mob who barged into the bar council during a forum organised by the bar council.

he was upset that the gvot. allow the use of ‘allah‘ in chrisitan publication.

“I am worried that the word ‘Allah’ was used with the aim to confuse the Muslims,” said Zulkifli referring to leaflets in Malay promoting Christianity which he claimed was distributed in a Malay-majority school in Ampang.

who can confuse the muslim but only the muslim themselves, like you, oh zulkifli! my mantra again – if muslims can be confused on seeing the word ‘allah’ in a christian publication, it means muslim themseleves are weak and insecure i their faith. thank you, zulkifli for confirming that.

ok as i mentioned before, whenever i made a post on the ‘allah’ issue, i will always end up with the following footnote:

From The Catholic Encyclopedia:The notion of Allah in Arabic theology is substantially the same as that of God among the Jews, and also among the Christians, with the exception of the Trinity, which is positively excluded in the Koran,

From Godallah:
The word "Allah" is the perfect description of the "One God" of monotheism for Jews, Christians and Muslims!
Is "Allah" only for Islam and Muslims?
[No! It is for All Three Abrahamic Faiths.]
"Allah" is the same word used by Christian Arabs and Jewish Arabs in their Bible, centuries before Islam came.

The Arabic word for "God", used in Islam and Christianity.

‘And dispute ye not with the People of the Book, except with means better (than mere disputation), unless it be with those of them who inflict wrong (and injury): but say, "We believe in the revelation which has come down to us and in that which came down to you; Our Allah and your Allah is one; and it is to Him we bow (in Islam).’