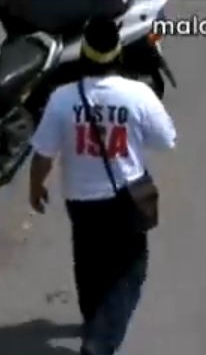 oh wow! a ‘yes to ISA’ t-shirt? great idea! i salute whoever comes out with it. it’s their rights to wear whatever t-shirt they like… just as i like to wear ‘no to ISA’ t-shirt. how come, though, sometime back, there was this man who was detained by police for wearing an ‘no to ISA’  t-shirt? how come during the anti-ISA vigil, ‘no to ISA’ t-shirts (and also RPK t-shirts) were not allowed?

ok maybe it is a little too premature to talk about the ‘yes to ISA’ t-shirt since this is the first time i came across it… but look at the 2nd picture – a gathering of more than 5 on the public road, obstructing traffic!!

this group of muslim NGOs, 500 of them, mind you!… held a gathering outside their meeting place at wisma sejarah (public place, once it is outside!), then march to the jalan tun razak police station.

my post ‘do these these malay/muslim reps speaks for ALL malay/muslim’ refers. these people were 2 groups of malay/muslim NGOs calling themselves ‘pewaris’.

well, i’m all for pewaris to hold a pro-ISA gathering and also a march… it’s their rights to do so… BUT so do we, those who oppose ISA… BUT then why the double standard? why did the police kacau those who hold anti-ISA gathering and even arrested them, while these pro-ISA people were free to do what they like!! BLATANT DOUBLE STANDARD!!

yes, as regards to sunday’s anti-ISA gathering organised by GMI, where 7 people were arrested, the bar council had this to say (from malaysiakini):

Meanwhile, the Bar Council has lamented that while protestors at the anti-ISA gathering were arrested, no action was taken against another protest on the same day – a pro-ISA assembly.

The pro-ISA assembly, organised by a group called Pewaris, ended in a 2km march from their venue at Wisma Sejarah to the Tun Razak police station.

"Both assemblies were a manifestation of the right of citizens to make known their views in a peaceful manner. Both assemblies represent the right to freedom of assembly that is enshrined in the federal constitution," said council’s president S Ambiga.

"Both groups of people legitimately exercise these rights. However, only one group was targetted for arrests, namely the anti-ISA group."

The 13,000-strong organisation representing the nation’s lawyers said it was alarmed by the arrests and described it as a case of "selective prosecution".

"We called on the police to even-handedly protect and uphold the rights of all concerned citizens to assemble peacefully to express their opinions."

yeah for the life of me, i just couldn’t understand why in the world our authorities (govt and police) are so scared of assembly by the public in public place. first of all, as if the authorities are so stupid not to understand our basic human rights – to hold a peaceful assembly? secondly, why they have no faith in the public at all that the assembly will be peaceful??  thirdly, when the assembly happened, why the need to bring in the riot police, as if the people who assembled there were terrorists or hard-cored criminals!! fourthly, as the assembly already happened, why can’t the police gave chance to let it go on smoothly instead of forcibly and aggressively shouting for them to disperse at once – they can stood by on guard but not doing anything… unless when they sense the people are getting out of hand.

gee… why am i asking all these questions. stupid girl, to waste time and effort on them!! once you are against the government, any assembly or protest you do, they will say it is illegal and crack down on you!!… and what’s that i hear again??… malaysia is a democratic country?? PIGILAH!! :mad :evil :mad

NOTE: the pictures here were taken from malaysiakini video showing the pro-ISA protest. no way am i going to put the video up in my blog! see also, fed up! angry! mad!  :mad no riot police stopping them! none arrested!!  ok then! the next anti-ISA protest, let’s not see the police and people getting arrested too!! (ohhh… me being a stupid girl again. fat chance!!). grrr!!   :evil

i found out about this link from kee thuan chye – a post which shows the two videos – the pro-ISA and anti-ISA videos. the post was aptly titlted, what i would have tittled this post of mine too as ‘pro-ISA, can. anti-ISA, can’t’.

kee thuan chye also reminded me about the incident with the woman – how the protestors became violent! quote from him:

The police arrested several people who took part in the anti-ISA one whereas those who were in the pro-ISA one were allowed to march 2km unharassed. In the middle of it, a female passer-by expressed her disagreement with what the rally stood for and was chased by the demonstrators who would have beaten her up if not for police intervention. When she got into her car, the demonstrators kicked it and continued to threaten her. This was a violent group and yet the police did not arrest anyone. Where is the fairness in that?

The police should have arrested them for resorting to violence when that brave woman spoke out her anti-ISA sentiments at their rally. (Does anyone know who that brave woman was? What she did should be highlighted.) Instead, the police have been arresting those holding PEACEFUL candlelight vigils in Petaling Jaya and Penang.