… and sikh all over the world had been using it for centuries!

malaysiakini has the news. highlight my own.

refer my earlier post (with pic of the latest herald) first for context, if you haven’t yet.

‘Allah’: What about us? ask Sikhs
Fauwaz Abdul Aziz 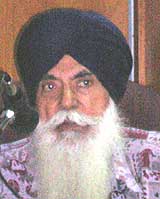 For centuries, Sikhs have used the words ‘Allah’ and ‘Rahim’ to refer to God as well as the Arabic terms ‘iman’ and ‘ibadat’ for faith and worship.

Following the government’s ban against the usage of purportedly ‘Islamic’ terms by non-Muslims, what will happen to the practice of the Sikh religion in Malaysia?

This was among the question raised today by Malaysian Gurdwara Council head Harcharan Singh (pic) following reports that the cabinet had decided against allowing the use of the term Allah by those practicing religions other than Islam.

“We have used the terms Allah and Rahim, for example, extensively in our writings and in our prayers to refer to the One God. The word Allah is used in our main holy scripture. Sikh gurus in India have used these terms for centuries, they have become part of the Punjabi language, and we are still using them today,” said Harcharan when contacted.

Sikhs also use the word ‘Khuda’ for God, he noted in reference to the term used, among others, by Bangladeshi Muslims.

“In addition to these words, we also use the terms iman and ibadat among the many other words (that are used by Muslims),” added Harcharan.

“If the word Allah has been banned for use by non-Muslims, what’s going to happen to Sikhs and the practice of their religion?” he asked.

Harcharan’s comments follow on the heels of a decision announced by Minister in the Prime Minister’s Department Abdulllah Mohd Zin yesterday that the cabinet had disallowed Catholic publication Herald from using the words Allah, Solat, Kaabah and Baitullah in its weekly’s Bahasa Malaysia section.

Abdullah, who oversees Islamic religious affairs, was reported today as having said the prime minister had directed him to clarify the matter so that the public would not be confused.

“One of the reasons given to uphold the restriction is because that it has long been the practice of this country that the word Allah refers to God according to the Muslim faith,” said Abdullah according to the Star.

It was only proper for other religions to use the word God and not Allah when referring to their God in respective beliefs, he added.

Poser for the government

Harcharan pointed out that the usage by Sikhs of Arabic and Persian terms normally used by Muslims is understandable given, among other facts, that Sikhism founder Guru Nanak had traveled extensively throughout Muslim lands.

Nevertheless, the issue raises a poser for the government, said Harcharan.

“I don’t know whether the basis of the government’s ban on the use of the word Allah by non-Muslims is political or religious. But if in today’s age of globalisation we are stopping people of one religion from using the words ‘belonging’ to another, I don’t know where we are heading”, he said.

Herald had earlier faced proscription following the Internal Security Ministry’s directive for it to refrain from using the word Allah in its weekly’s Bahasa Malaysia section.

Herald was later informed it’s permit had been renewed, with its editor Father Lawrence Andrew saying he had received a letter indicating it can resume printing without restriction on the word Allah.

Notwithstanding, the publisher has filed a writ of summons in the Kuala Lumpur High Court to seek declarations of use of the word Allah.

here is the press statement from aliran. again, highlights my own to emphasise the points.

The word "Allah" and the controversy in its usage
Friday, 04 January 2008

As we have pointed out in our statement of 22 December 2007, “Languages are the common heritage of humanity. Because of this, the various languages developed and grew rich in expression. They absorbed words and expressions from one another and, in the process, languages became expressive, expanded and spread across the world.”

This being the case, no community can claim monopoly to the use of any word. It would be an absurd claim. Further, the word “Allah” is not a local word derived from Bahasa Malaysia for anyone to lay claim to its exclusive usage.

By taking a political decision and making a political stand on its usage, the Barisan Nasional is creating confusion in the minds of thinking Malaysians. The harmony that the Prime Minister is trying to preserve and promote is being muddied and our unity is being threatened by the actions of uncaring politicians. The PM, unfortunately, is unable to rein in these politicians.

While in the past, certain individuals were involved in claiming exclusive right to the usage of the word “Allah”, now it is the cabinet that has decided that except for Muslims others cannot utter this word or use it in their writings. In other words, this is the decision of the BN government supported by all the 14 component parties represented in the government.

We would like to pose a question to the BN with regard to the Rukunegara and the five principles which have been adopted as the guiding principles of the nation. The first principle states, “Kepercayaan kepada Tuhan”. Now, according to the Cabinet’s logic, will the Muslims be confused when they recite the Rukunegara because the term used in reference to God is "Tuhan" instead of “Allah”? Going by the Cabinet’s logic, can non-Muslims sing the state anthems of certain states where the word “Allah” is included in the text of the song?
Now, Malaysians will know how absurd and ridiculous the BN government sounds and behaves in a plural society.