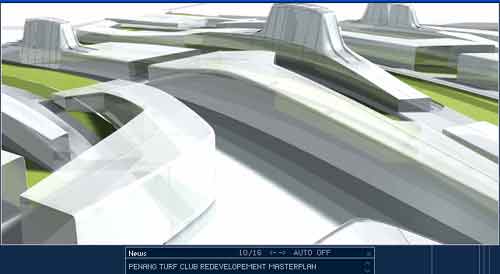 whazzt??  modern kind of factories? a city in space? the lost world of gnanep?

well if you reverse ‘gnanep’ you’ll have ‘penang’. ahhh! this is no lost world but the future penang! the penang global city centre (PGCC)!

the picture above was taken from anil’s blog post ‘the mothership is landing’.

read too his other post where an architect of the PGCC project had revealed the greed of the developer.

anil also has an article in IPSnews dated yesterday, titled ‘malaysia city project robs common green’.  very good read there for those of you concern about penang’s over-development, about penang turning into a concrete jungle, about penang losing its green.

btw, have you notice the spin (again) in the star paper of 10 sept and 11 sept? on 10 sept, the star tempts us that the PGCC will have the first international chinese school, and on 11 sept, penang performing arts centre chipped in to spin by saying that there will be a new centre for them in PGCC with a built-up area of 15,000 square metres, several amphitheatres, and a mini-concert hall with 500 seats.

btw to digress from PGCC, i’m sure penangites know of the times square in dato kramat road (formerly the dato kramat smelting company) that is coming up? it looks like a mega project too with many high-rise buildings.

do you know that the PGCC will cost a whopping RM25 bil, and consists of 33 tower blocks over 40 storeys high? as i commented in my earlier post – die liao! 40 storeys 33 tower blocks are going to further sink penang island. anyone want to offer to coach me in swimming?

the star reported about PGCC today. i guess it would have been on the front-page if not for the sumatera earhquake news (jeff ooi had a great post on this, with diagrams and all that). well, the PM was there to unveil the project.  anything… esp. a mega project officiated by the PM usually get front-page news. oh, the PM, a ‘penang boy’  said that KL has KLCC, so now penang has PGCC.

the hard-copy of the star has a picture of a view of PGCC but i can’t find it online. well, still looks like an alien city.

since the news is quite short, i’ll reproduce it here in full.

PENANG: Three decades after being dubbed the “silicon island”, Penang is set to move on to the world stage as a global city centre.

The project will comprise, among others, hotels, condominiums, commercial centres and a central park.

The Prime Minister, a Penang boy, said this would be a “meaningful” project to the state and country.

“As Prime Minister, I know that it will contribute significantly to the national economy,” Abdullah said.

“While Kuala Lumpur has its KLCC (Kuala Lumpur City Centre), Penang will have its very own PGCC. Both make me proud.

“PGCC is a high-impact project to complement the Northern Corridor Economic Region. I know Penang will do well,” he said when unveiling the masterplan at a hotel here.

Abad Naluri, an associate company of Equine Capital Bhd, will undertake the project.

Abdullah, who is the Finance Minister, said PGCC would offer excellent facilities to foreign investors and an alternative avenue for them to set up offshore offices beyond the Klang Valley.

“This project will make the northern region viable for economic development. I hope this project will be implemented as soon as possible after getting the necessary approvals from the relevant authorities,” he added.

Abdullah thanked the Penang Turf Club for allowing the development of PGCC.

“If it is not for them, this will not happen,” he remarked.

Abad Naluri bought the land for RM488mil in 2002 when the Penang Turf Club committee felt that the existing facility could no longer cope with the demands of modern-day racing.

He also dispensed some important advice to the people: “Drive home safely for the Hari Raya break.”

Reminding everyone that the festive period was a time when many road fatalities occurred, Abdullah said he wanted to remind them of this on the first day of the fasting month itself.

“I hope parents will advise their children to drive carefully when they return home to celebrate Hari Raya.