You are here: Home › news › death of an innocent, helpless child 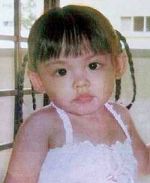 this is a picture (taken from the star) of 4 years old shearwey ooi ying ying. isn’t she so cute and lovely? but alas, her short life of 4 years was snuffed out just like that. again, a helpless, innocent child had to die in the hands of adults. and what a cruel, gruesome way she had to die, murder and burned and her bones thrown away in different places.

while some english media (like at sun2surf) had just stated ‘a couple’ had been remanded for her murder – the woman as ‘a close relative’ but the chinese media had already mentioned the woman is, believe it or not, ying ying’s own mother. well, i heard on the 8.00pm news on tv yesterday, it was mentioned ‘mother’ too. so to those who were saying "please don’t speculate", no we are not speculating. the chinese media and the tv mentioned it.

well if you want to hear a speculation, here’s what we in penang heard: some people were saying ying ying’s mother’s boyfriend wants to be with ying ying’s mother but he does not want the child. a child will be burdensome to him, see, as he only wants a girlfriend/wife, not a child. so he (maybe together with the mother) planned how to get rid of the child.

ok whatever it is, whether that speculation is true or not, the fact remains that an adult had gruesomely murdered an innocent helpless child. what did she do to deserve to die like that? my god! she is only 4 years old, for heaven’s sake.

i get very mad whenever i heard of adults killing children, especially their own children.  to me, this is a most terrible, heinous crime! my heart went out to the poor helpless childlren. why, why? why killed the children? in jeff’ ooi’s blog, he had also asked why this type of crime happened.

some of you may or may not remember there were quite a number of instances sometimes back of parents killing their own children. i had blog about them 3 times.

in 2006, a young indian woman who had some family problems, took her 3 children to the railway track to let the train ran over them.

somewhere in the beginning of this year, a chinese father killed his own children, then committed suicide himself… because of family problem.

also, in the beginning of the year, an incident  in penang, where a malay woman strangled her own children just because she was angry at her husband.

why is it whenever adults got into a fight or some conflict, the children became the victims? why? it’s just not fair!!

coming back to ying ying’s murder, i hope the one/s found guilty would be sentenced to death!! they deserved nothing but death for taking away the life of a young helpless innocent child.

3 Responses to "death of an innocent, helpless child"