You are here: Home › government › the two MPs whose brain leaks 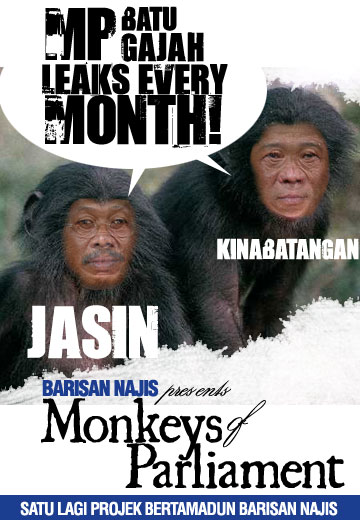 i’m talking about the sexist remark made by 2 MPs in parliament.

however fong’s application was rejected. with all BN MPs supporting thier sexist comrades, even the women BN MP. nazri, the minister in the PM’s dept. gave the excuse that this was all a joke – a play on words, why the fuss.

excuse me, mr PM in the PMD, you call a sexist remark that humiliates women a joke? then you are no better than those 2 MCP.

as one commentor in mave’s blog commented – ‘it is a joke when uttered by UMNO people. have it been the opposition, they would have been suspended’ – so very true!

there is a video where the offensive remark was heard posted up by a few bloggers like lim kit siang, jeff ooi and politics101.

what has become of parliament? beside turning into a circus, it has also become a place for MPs to make fun of women. this ‘leak’ incident was of course not the first incident when some BN MPs made offensive, crude, sexist remarks targeted at the women of DAP.

related links of some bloggers who blog on this issue:

8 Responses to "the two MPs whose brain leaks"