You are here: Home › malaysia › the pursuit of A’s 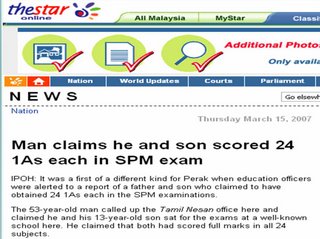 when i saw this (picture stolen from maverick’s blog) on the star paper front-page, i was kind of going "huh?"

oh! then i thought to myself, he wants to show off lah… reading so much in the paper about this student and that student got 12 A’s, 19 A’s and so on, so he need to top all of them, what better way than to say he had 24 A!!

this set me into thinking… does acquiring lots of A’s means you are very good? why this seemingly addicted pursuit of lots of A’s?

Nadiah, 18, said she was not satisfied with the results but would put the disappointment behind her.

and this boy said that 16 A’s to him is not enough.

(to be continued tomorrow… gotta go now as i hear thunder and spy lightning!)

every year when the SPM (or STPM) results were out, you’ll see in almost all the papers, news splash of excited over-joyed students who get lots of A’s. i was wondering then would this sort of makes those who did not get any A’s felt so disheartened? they might think "if only i get lots of A’s, i would have been featured in the paper" or worst… they might fear people asking them about their result, since the paper concentrate so much on the numbers of A’s, people will tend to ask a student "how’s your result? how many A’s did you get?" (or "did you get any A’s?"). if s/he does not has any A’s, s/he would feel embarrassed to answer.

this brings to mind what walski had asked in his post:

he then further asked:

Which brings up another question: is churning out as many A’s as humanly possible (or some might argue, inhumanly) a reasonable measure of the quality of Malaysian education?

and proceeded to bring out the ‘bell curve’ chart, where he offered a manipulated chart which he said, the mere numbers of A’s isn’t a measure of anything significant.

beside recommending you to read walski’s post on this issue, there is a very good comment which i highly recommend you to read, found on a blog when i went PPS-blog hopping. this person was also talking about the race for  A’s, including the education system. go to the malaysia students blog to read.

4 Responses to "the pursuit of A’s"