You are here: Home › general › the last two PR ceramah in penang state

in penang, pakatan rakyat (PR) will have its final ceramah (rally) before polling day – one on the island and one on the mainland. do not missed them! no excuse for missing them since the island people and the mainland people are considered. why, i'm sure many people will even go for both ceramah!

lately, as we had heard and seen (like on facebook) many of the PR ceramah all over the states had been very well attended. no free food, no free t-shirt, no free entertainment… yet the ceramah continued to draw in crowds, as many as 70,000, as seen on 29 april monday at han chiang. i hope today's esplanade will draw in 100,000! so YOU must be there to made up the crowd.

i will be there of course but luckily i have a media tag so i can be inside the media enclosure right in front of the stage. will be able to get good shots of the crowd and the speakers then from there. had attended the one on 19 april at the esplanade too and there were about 50,000 people! you can see the photo album on my facebook.

ok right now, i only have the poster for the ceramah on the island today. tomorrow's ceramah will be IJM promenade, bandar sri pinang, at 8.00pm. 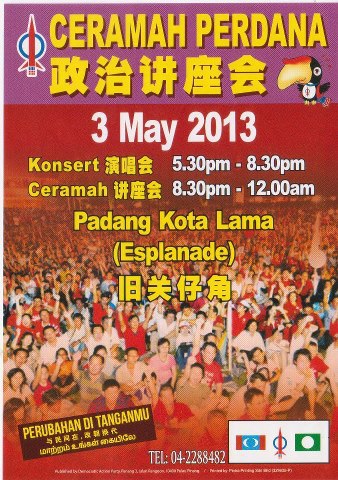