You are here: Home › penang › hoo-haa on the penang second bridge 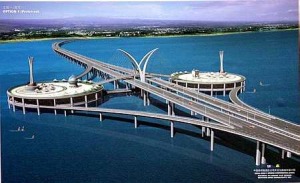 see what i told you! i said we don’t need the penang second bridge. the penang govt. had insisted on it. at one time, i remember the penang CM’s lim guan eng, had hastened the federal govt. to quick complete the second bridge.  last week, the PM had confirmed that the bridge toll would be RM9.40… and viola! up jumped the PR govt!  oh well, ok, the public also jumped up but of course the same public who insisted on the second bridge too. they want the bridge but they are not willing to pay so much.  well understandably, RM9.40 can be quite a burden, esp. if one travel daily to and fro to work but then what do you expect? you know lah how the umno controlled govt (federal) work – it is expected.  in fact as early as 2008, it was already planned that the toll will be RM9.40.

so why all the fuss now? well in one way i’m asking that is because i would like to say ‘padan muka’ to those who clamored for the second bridge… but hold your horses!… don’t shoot me, ok. in another way, ok i do understand all the fuss made by PKR and the public. well it’s the same old tune anyway…. no open tender, subsidized cronies companies getting the contract and so on. well these are all the same reasons i listed down on why we don’t need the second bridge in the first place! before anything get started, they (penang state govt) should push for answers to all this… not now but i guess it’s better late than never eh?

ok please continue reading to read the press statement by PKR on the press conference, followed by the article from malaysiakini. as for the UEM letters (original scanned) i will put them up tomorrow as it’s too late to post them up now (past 0200 hrs!).

UPDATED:  the letters can be found at my facebook album.

There were several main points in the letter.

Former Chief Minister denied Sim’s statement at that time. With recent developments, Sim’s revelations have proven to be true. Recently, first came the controversial cancellation of Touch & Go discounts. Under immense public pressure, the Gov flip-flop and announced that non-Penangites will no longer enjoy the discount. Last week, Prime Minister has confirmed that Penang Second Bridge Toll will be RM9.40, consistent with Sim’s revelation. Now, we are worried that the Government will just go along with whatever proposal the UEM in this letter.

Something is not right with Penang Second Bridge Project. At a time where federal minister warned that the country would go bankrupt, huge amount of money has gone to subsidized crony companies (please refer Government Assistance section). Federal Government gave Penangites various construction costs, the construction cost keeps escalating although material prices have come down significantly, the toll rates jump 34% from RM7 to RM9.40. The terms and conditions of the contract are shrouded with secrecy. All these have to stop. Penang Parti Keadilan Rakyat demands accountability from the Federal Government.

Penangites have been short-changed for the first time when the Government proposed and selected the current alignment and design without consultation with the Rakyat. Then, the government again direct negotiated with UEM without open tender.

We need to put a stop to all these corrupt practices. Today, we are revealing the document that we got in 2008. This letter has not been disclosed to public before. It is an old document, we believe there will be more recent development. Under BN administration that has never practice transparency, this is the only financial analysis we have had. In the name of transparency, the rakyat has the rights to know.

Failure to do so, Penang Parti Keadilan Rakyat will intensify our campaign to halt the Toll Hike. We will mobilize the Rakyat to tell the Prime Minister, we don’t want toll hike. We want Competitive, Accountability and Transparency in Second Penang Bridge Project.

Penang PKR today accused the federal government of being under the thumb of ‘crony company’ and bridge operator UEM Group Berhad, to the detriment of the people of the state who had to pay for the rising costs of the first Penang Bridge and may suffer the same fate with the second.

As proof, the party’s state communication bureau chief, Sim Tze Tzin (right), distributed copies of a letter allegedly leaked to PKR by a whistleblower in 2008, listing key points of a proposal by UEM to the government with regard to the first and second Penang Bridge projects. Many of the proposals, he alleged, has been adopted by the government.Among others, the letter titled ‘Penang Second Bridge Project – Financial Analysis’ written by UEM managing director Ahmad Pardas Senin to Sulaiman Mahbob, director of the Economic Planning Unit under the Prime Minister’s Department, detailed the government-linked firm’s proposal to stop giving a 20 percent discount to Touch ‘n Go card users and raising the toll for both bridges to RM9.40.

The Pantai Jerejak assemblyperson pointed to recent developments which, according to him, prove his allegation that the government is playing follow the leader with UEM.“First came the controversial cancellation of the Touch ‘n Go discounts. Last week, the prime minister confirmed that the toll at the Penang Second Bridge will be RM9.40… (This is) consistent with my earlier revelations. We are worried that the government will just go along with whatever proposals made by UEM as in this letter,” added Sim.

DAP’s Bukit Bendara parliamentarian Liew Chin Tong, who accompanied Sim at the press conference, chimed in that he was shocked by the details in the letter as it mirrors almost perfectly the details about the bridge projects given in the reply to his question to the prime minister in Parliament last week. He concurred that this hinted at the government being subservient to the GLC’s whims.

Sim had earlier revealed the details of the letter in 2008. However his revelations were refuted by then-Penang Chief Minister Koh Tsu Koon (left). This is the first time that the letter itself has been made available to the public.“Something is not right with the Penang Second Bridge project. Unfortunately, according to the current BN practice, their crony companies always come first. We need to put a stop to all these corrupt practices,” he added.He said that at a time when a federal minister had warned the country could go bankrupt if it spent too much money on subsidies to the public, the government seemed to be spending a lot of money to subsidise companies like UEM.To prove this, he pointed out details in the letter which revealed allocations of up to RM22.8 billion in financial assistance to UEM in the form of government soft loans, tax allowances and grants, for a project which only cost about RM4 billion.Sim also gave other examples of questionable practices in the Penang Bridge projects, namely the cost which continue to escalate despite prices of building materials having gone down, the recently announced 34 percent jump in toll rates from RM7 to RM9.40, and the extension of the toll collection to 2051 despite the concession for the Penang Bridge ending in 2018.These and other questionable details about the bridge projects, said Sim, are difficult to discuss as the terms and conditions of the contracts for the bridges are shrouded in secrecy.“BN has never practiced transparency, and this is the only financial analysis that we have. In the name of transparency, the rakyat have the right to know,” he added.‘Declassify terms of second bridge contract’In view of this, Penang PKR called upon the the prime minister to declassify the Penang Second Bridge toll contract between the government and UEM.“Penangites have a right to know what is in for them. They are the people who will use it every day, They are the people who will have to pay for it for the next 40 years.”Should the government fail to do so, he added that Penang PKR will do all it can to oppose the planned toll hike.“We will mobilise the rakyat to tell the prime minister, we don’t want a toll hike. We want competitiveness, accountability and transparency in the Second Penang Bridge project,” he concluded.Sim contends that the best way to solve this issue is for the government to put the project up for bidding by open tender. He believes that competitive bidding will reduce the cost of the second bridge significantly and bring in the best expertise and technology.Also present at the press conference was PKR Balik Pulau parliamentarian Yusmadi Yusoff.

2 Responses to "hoo-haa on the penang second bridge"