You are here: Home › Double standard › yeah, why should karpal apologise? 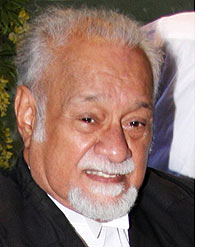 i refer to the malaysian insider’s article ‘karpal refuses to apoligse, yet protest mounting’.

DAP chairman Karpal Singh said today that he would not apologise to Sultan Azlan Shah of Perak and that he would proceed with his plan to take legal action against the Sultan for allowing the Barisan Nasional (BN) to replace the Pakatan Rakyat (PR) government in the state.

you know i believe that karpal had relented a bit (when he mentioned about meeting anwar) and maybe did thought of not sueing the sultan but then these idiots umno youth gangsters had to protest with banners criticising karpal and to the extend of saying stripping him of his citizenship – i believe that pushed karpal further to want to sue the sultan.

oh btw one of those idiots is the arrogant son-in-law. please read about him in susan loone’s. he even said stuffs like (not his exact words) "my youth members are angry. they have their limits, don’t blame me if they do something" and "this is insulting the sultan. i give permission to my youth members to do what they like". well well well, ain’t that seditious words? and yet the police and authorities close one eye – because he is UMNO!! if it is non umno who said it, everybody will jump up pointing the seditious fingers at her/him.oh yeah they also call upon the ISA to be use on karpal.

the protest by the youth – first in ipoh, how come no riot police? how come no one was arrested? but the gathering in support of nizar, riot police everywhere and 9 people were arrested!! then yesterday’s protest in kl in front of karpal’s office – why the police allows it? grrr! double standard!! double standard! DOUBLE STANDARD! :mad

didn’t i predicted that the umon protest they would screamed their lungs out about protecting malay’s rights? i was right! wasn’t this being racial? but it is ok because they are umnoputera. DOUBLE STANDARD! :evil i saw on tv one of the banners they carried said ‘melayu tak kan hilang dari dunia’. LOL! made me laugh so much!! beside the point of this being racial, which is no point talking about it since the law for umnoputera is, it is ok to be racial, what i want to talk about is this kind of slogan really reflect on the insecurity of the umnoputera. i had said it before numerous times, this is very silly because of course malays won’t disappear from the earth, and if there are a group of chinese who protest with slogan "chinese won’t disappear from the earth" i know i will die of embarassment.

the umno protest – looks like they were all out to protect the sultan…. huh? have they forgotten what happened nearly a year ago when the sultan of terengganu wanted to appoint a new MB? they protested against the sultan and even call the sultan names! see aisehman’s blog to jolt your memory.

coming back to karpal, about his earlier outburst at anwar – actually i do agree with him. agree with him on what he said about anwar but i don’t agree that PR need a new leader… not at this moment.

more often than not, what karpal said were true. very true. he is the remaining very few (or only one?) non umnoputera, opposition (as to federal) leader who dares to speak his mind. i admire him for his stand. he has principles. he is blunt all right but he always calls a spade a spade and never beat around the bush. remember when he spoke up regarding hudud laws during the time PAS talk about implementing it if PR takes over? he was the only one who dare to speak up!

hey, i’m not the only one supporting karpal singh – there are many who do support him. don’t forget to read the malaysian insider’s comments. majority of those supported him. several comments were very good, especially when they rightly hit out at the umno protest at the same time. so good, that i’m going to reproduce some of them here as a conclusion. (i’m bolding some parts for extra highlighting!).

written by eddydaud, February 10, 2009 Actually there is no provision in the Perlembagaan that can stop a Malaysian citizen to sue another Malaysian. UMNO youth should not use this to gain political mileage, the Sultan is a highly learned former Lord President, he knows the Law and he knows what he is doing. Just a show of support to the Sultan will do, no need to force Karpal to apologise or what, lagi keruhkan keadaan. Karpal have every right to sue BUT I believe he needs special permission from the AG before he can take this matter higher to the Special Court.

Having said that I was told that it is an exercise in futility to challenge the decision of the Sultan as decisions such as this cannot be subjected to judicial review. May be wrong, any constitutional lawyers out there who can enlighthen the not so well learned in Law.

written by Charles, February 10, 2009
It was Mahathir who amended the Federal Constitution in 1993 to allow Royalties and Sultans to be brought to Special Courts. Malaysian Government should charged Mahathir for treason. He is the one who brought shame to the royalties which should not have happened.
written by Lek, February 10, 2009
karpal has not done anything wrong so why should he apologise. if anyone has erred its the sultan. these bunch of umnoputras are hooligans dan kurang ajar. little wonder umnoputras can never prosper or become famous internationally beyond our shores without crutches.
written by yapchongyee, February 10, 2009
I read all the comments that were generated on Karpal’s intention to sue the Sultan and frankly, there are too many bullshit opinions that Karpal need to give respect to the Sultan and that Karpal ought not to take legal action against the Sultan because that will be disrespectful. It is this form of bullshit that I find so illogical and infuriating. Surely the issue is whether there is a law that allows a litigant to pursue the Sultan for any infraction of the Law and that such litigant has recourse against the Sultan. I remember reading some one obtained or sued the Sultan of some state for a million ringgit; and if that case is true then why SHOULD NOT KARPAL PURSUE THE SULTAN IN SUCH COURT THAT THE LAW HAS PROVIDED FOR THE PEOPLE TO SEEK REDRESS AGAINST THE Sultan ?

It is illogical that there is a law that was put in place by Mahatir and tested and applied in Malaysian court of law and given effect to, and we are NOT TO USE THE LAW BECAUSE IT IS DISRESPECTFUL if we sued the Sulltan under such a law ? This reasoning is total bullshit ! If the Malays will find it disrespectful to sue the Sultan under the law then why did UMNO under Mahatir AMENDED THE CONSTITUTION TO ALLOW FOR THE RIGHT TO SUE THE SULTAN ? Is this another bullshit that Mahatir is Malay and Karpal is Bengali ? There you have it another bit of bullshit. Where is the logic that Mahatir can but we cannot ?

I support Karpal to hold that what Sultan of Perak had done to replace Dato Seri Nizar in fact and in law amounts to a coup d’tate and is illegal and unlawful. No one is above the law and if you agree to that premise then you will also have to agree that if the Sultan had breached the law he has to be accountable under the law.

I say to Karpal dod what the law allows you to do and piss of those UMNO youths pieces of shits. Hey Karpal this is a fine case to sue the sultan for malfeasance in office. Why don’t you try it ? That is the law that fits this case perfectly.

written by Johan Malaysia, February 10, 2009
While, is it legally wrong for Karpal to make statement that he would take legal action to challenge Sultan’s decision on this way to change the government? Is it seditious? Is it immoral? Is he asking other people to hate or topple the monarchy institution?

At most, it is politically unwise. It is unwise politically to utter that statement, before coming up with a common statement from the PR as a whole. Because this has given the UMNO goons foothold to distract the focus from the real issue; "Unconstitutional, undemocratic, immorally topple the democratically elected government, which plotted by Najib & Co."

Najib & Co. has fully taken this statement to flame it further and hope it to distract public perception. They have even flamed it with racial rhetoric and sentiment. This is even more seditious than Karpal’s statement, which has make purely from the legal point of view. But, this is the whole purpose of it, and it is those racist UMNO goons are best at. As the monarchs are the constitutional head of state, they are the head of state for all Malaysian, regardless of race. If the Sultan has been insulted or hated, it should be an issue for the whole society; it shouldn’t be taken as a racial issue.

Najib & Co. has totally no moral ground to stand with, and this is the only perceived issue they can continue to dig on.

3 Responses to "yeah, why should karpal apologise?"