no, this post has nothing to do with the debate that had been going on – on the mandatory HIV screening for couples who are going to wed. you can read about it in malaysiakini. (this time i’m not going to CnP the article. can’t do that everytime. go sign up as subsriber to malaysiakini!). 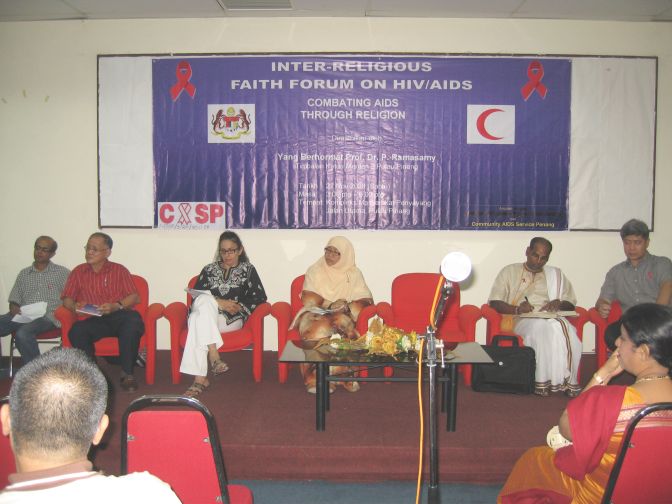 remember the post i made on the 20th anniversary of world AIDS day? i mentioned about me attending an inter-religious faith forum organised by the community AIDS service, on ‘combating AIDS/HIV through religion’. i said i had written an article to our catholic weekly, the herald. well, it was out at this coming week (29 dec) copy, so now i can post  the article here. i sent them 2 photos but they never pubilsh any. they also cut off the last part of my article where i wrote about questions from the floor. i’ll put up one of the photo here, which you see the speakers from the 5 different faith. extreme left is anil netto, the moderator. then the buddhist speaker, sikh speaker, muslim speaker, hindu speaker and christian speaker (see their names in the article below). i’ll have it here my orginal article.

The Community AIDS Service, Penang (CASP) organized an inter-religious faith forum on ‘Combating AIDS through religion’ on 22 Nov. at the Kompleks Masyarakat Penyayang.

Mr Selva, from CASP started by welcoming and introducing the guest of honour, YB Ravindram SUbramaniam, MP for Batu Uban.

He informed that this forum was jointly organized by CASP and Jabatan Kesihatan Negeri. He said that every year, come World AIDS Day on 1 Dec., CASP will organized a few activities, and one of them is this inter-religious faith forum.

“Religious leaders have an important role to play in combating AIDS”, he said, “Therefore we are here to listen to them.”

He then introduced the moderator, Mr Anil Netto, an accountant turned journalist.

Mr Anil Netto felt that people were fortunate to be able to hear the views of different religions on AIDS. He hope that through their sharing, we can reach out to HIV/AIDS victims and learned not to oustracised them. He then called upon the guest speaker for a short speech.

He also said that it is important that AIDS awareness is brought to the school. This is to instill the awareness in children at a young age.

The first speaker for the forum was  Mr Thirumurthy Kolandai who is the Honorary Secretary of Hindu Shangam Penang Branch.

Mr Thirumurthy read out passages from their Hindu scriptures which touch on the transdensual soul and how it is connected to life. It was all read in Tamil then translated into English by himself. The gist of it was that, he said, if everyone should read, study and understand the scriptures, then live their lives according to scriptures.

Next person to speak was Ms Ms Shila Kaur, Regional Health Officer at the International Federation Of Red Cross an office for East Asia. She represent the Sikh faith.

Interestingly, Ms Shila started off by saying that HIV/AIDS is a ‘democratic’ disease as it does not look at whether you are a man, child, homosexual, heterosexual and so on. She said that the Sikh faith teaches that all men are equal, no matter what condition/situation they are in, therefore one should not take on a moral high ground to outstariced HIV/AIDS victims.

She said that religion is a prescription on how to live a healthy life-style, and if one is to follow the code of conduct set by religions, one can learn to be healthy.

She ended with a advice, “Live your life according to your religious prescription.”

The next person to speak was Br. Gregory Chan, representing Christianity. He was an ex lawyer who is now a Seminarian studying philosophy.

Br. Gregory was very passionate when he spoke as he had first hand experience dealing with HIV/AIDS victims. During his pastoral work, he had been working with CASP, and came in personal contact with HIV/AIDS patients.

He shared that he now appreciate human suffering much more after having spent time with the patients. He felt very touch by how the patients live despite their conditions. He stressed that as care-givers, they were there not to prepare them to die but to help them continue living.

Br. Gregory pointed out that the Christian faith basically rest on these two dimension – love of God and love of neighbour.

“When we have the assurance of the love of God, we will then tend to love our neighbour.”  he said.

He proceeded to tell the parable of The Good Samaritan, to bring up his point on how people should treat the HIV/AIDS victims. Being a neighbour, he said, is to treat everyone the same, no matter who they are.

“To combat AIDS”, he said, “We must learn to combat ourselves – by looking deep within ourselves – see how we understand AIDS the disease. We  must also change our mindset towards how we view AIDS.”

He ended with a though-provoking phrase for all to delve on – when we deny the HIV/AIDS victims their humanity, we become inhuman.

Mr Oo touched a lot on the mind. He said that to have compassion, one must also have wisdom – the wisdom to think for oneself, for example on the real meaning of charity.

“For us to show our good and positive qualities”, he said, “we must first cultivate all those qualities in our mind.”

He also said that unconditional love, ‘pure meta love’ to the Buddhists must be totally non judgmental and one should not only feel the sympathy but also the empathy.

He informed that the Buddhism way of life emphasise on these 5 rules: 1. do not kill, 2. do not steal, 3. no sexual misconduct 4. do not lie and 5. avoid drugs, alcohol or anything that can cloud one’s mind.

He wound up by stressing that the mind is very important – that’s why the Buddhists stressed a lot on meditation. How one look at things, comes from the mind, he said, and consequences follow from how you think. He thus advised people to develop their mental state through meditation.

The last speaker from the Muslim faith, Dr Wan Nor Bt Hassan is a medical doctor in USM. She talked about what Islam forbids, like same sex, drugs taking and infidelity. These, she said, were already enshrined in the Koran 1000 years ago when Prophet Mohammad had warned the people against.

She also mentioned that in Islam, liquor and drug addiction are the major ‘master of mischief’, which in on way or another contribute to the spread of AIDS.

“As Islam is merciful and compassionate”, she said, “we do not only care for those who are infected but we also see to the prevention of AIDS.”

She said that Islam encourages prevention. If one were to follow Islam way of life – change their behaviour and style of living according to Islam, AIDS can be avoided.

She ended with the quote “Have compassion to the one on earth, and the one beyond will have compassionate on you.”

When all speakers had their turn, it was open to floor for questions. An elderly man remarked that all the speakers were talking about love and compassion but none really talked about bringing about AIDS awareness.

Dr Wan Nor respond that the best place to bring awareness of AIDS is through the school, and also maybe to factories. She said that we should suggest to the education authorities about bringing AIDS awareness.

At this, Mr Selva said that so far CASP had been to 35 schools to talk about AIDS and currently work on bringing awareness to school is still in progress.

Br. Gregory Chan said that attending forum like this served as an awareness of AIDS and he remind the audiences to read and understand the pamphlets they had been given at the door – as all those materials serve as awareness too.

Mr Oo  said that awareness is giving the right facts to people. “We should incultivate in the young a sense of moral values” he said.

Mr Oo said that in Buddhism, they have the 5 basic precepts to guide them. If they put their mind set to these 5 precepts, then they’ll understand about how to live life to prevent AIDS.

While Dr Wan informed that Islam is very particular about cleanliness, Ms Shila said that it is very important to tackle the issues at hand, to deal with it at the root. Br. Gregory, on the other hand talked about remaining faithful as one of the harm prevention.

He winded up by saying that it is important to in incultivate in children to live a healthy faithful life.