You are here: Home › general › police brutality! one more reason to vote out UMNO!

many bloggers had already blogged on this – yes i’m always late. well i can’t blog during office hours! and at home, i usually blog only after midnight. nevertheless this is something very important that i HAVE TO blog on it. it’s regarding the bandar mahkota cheras ‘barricade/toll’ issue.

look at the picture here (courtesy of malaysiakini)….
this is the picture of 21 years old chang jiun haur. 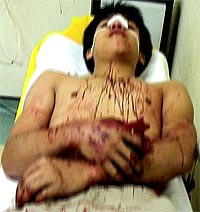 … can you believe it, that this was done by the police… the FRU police to be exact.

he was repeatedly beaten by 20 riot squad (FRU) personnel armed with batons and kicked with boots.

phew! can you believe that? imagine 20 armed men beating a helpless unarmed young boy. and why was he beaten so violently?

A high-ranking police officer at the scene claimed that Chang had run over a FRU personnel with his car.

“He asked for it. He ran over a policeman and he got what he deserved,” the officer told Malaysiakini a few minutes after the incident.

what kind of logic is that? assuming chang was guilty of trying to run over a FRU personnel with his car, did he deserved this? is that what our police think? if so, i’m afraid… very afraid. the police who are here to uphold law become lawless. weren’t they the ones who used to tell us the rakyat not to take the law into our own hands when e.g we started beating the driver who killed someone with his car? now they are doing exactly what they told us not to!

ok before i end, methink i gotta do some explanation of the heading. i guess some people, esp. pro umno people of course (and umno cybertroopers?) will ask me what has the police brutality on chang to do with umno? plenty.

the latest news from malaysiakini stated that the selangor MB had revealed that a state owned company holds some shares in grand saga. there’s an interesting chart on who owns grand saga with all names of the share-holders and the percentage spelled out. you guys should subsribe to malaysiakini! support malaysiakini!

10 Responses to "police brutality! one more reason to vote out UMNO!"