You are here: Home › Uncategorized › learning from workshops

the workshop on podcasting, blogging and content management system (CMS) had about 20 persons in attendance. ong has the list of names so i’ll wait for ong to post about the workshop first before i can get hold of the names. most of them were from NGOs and a small group of USM students. none of the regulars penang bloggers, whom i used to meet during our bloggers meet turned up. i guess they are not interested in sitting through workshop learning something (or perhaps they already know/good at those topics). they are more interested in gathering for socialising only! funny though that in meeting at starbucks or coffee bean or some fast food joints, a person can only ‘socialise’ with the ones on your right, left and in front of you and NOT with everyone… so what’s socialising? if meet in a private place (like this new place ‘d space’ at least everyone can walk around and mingle… that is real socialising. anyway i know some bloggers have ‘clique’ so i guess if one don’t come, the others won’t come. 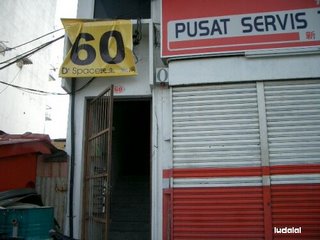 it’s easy to find the place with ong’s detailed description. 4 storey building, tyre shop ground floor so he said, and the no. 60 was prominently displayed too, not forgetting the sign of “d’space”, the venue at 4th floor.

ok back to the workshop. i was the 3rd person to arrive. there was anil netto there when i arrived with a lady, angeline (both writes for aliran media monitor). small world indeed… found out that angeline was my ex-classmate. later on the others slowly arrive but as jerry’s podcasting was first on the schedule and he didn’t arrived yet, we had to wait for him. jerry (who has 2 blogs – his fe 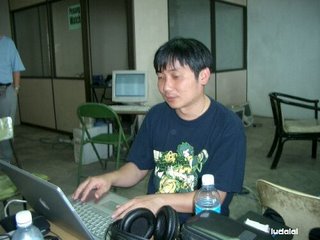 tish (haha) and his podcast), and his 2 helpers came all the way from KL. ong said they were already in penang but were enjoying penang’s good food for breakfast, thus a bit late.

jerry (picture left) at first tells us about podcasting – the equipments we need for podcasting and how to do podcast and so on. at about 11.30am, he get in touch with danny and elizabeth who were that time in the petrol hike protest in KLCC. you can listen to what they had to say here.

jerry also passed the mic to everyone present to talk about the petrol hike. as the mic was passed around and each one spoke, it seemed that everyone (more than 10 now) were against the petrol hike and everyone support the protest… until it came to tan of freemedia, who simply said “i support the petrol hike”. ahh… good… because that was what i was going to say too (surprise?). after him, there were another 3 persons, then came my turn. 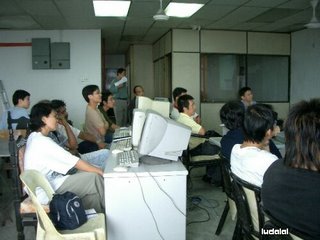 “i think i am one of the very few, like tan, who support the petrol hike. well er… not exactly support but what i meant is that sure i was angry and disappointed at the petrol hike and i understand people’s frustration and anger, but the price had been hiked up already, what can we do about it to get it down? nothing. why protest? despite all the protest, surely the government will not bring down the petrol price.”

this was not my exact words but the idea is there. if you want to hear my exact words, wait for the podcast to be uploaded by jerry. (i will sure announce it to you) i’m not in favour of the protest because i see no point in that at all. once or twice protesting is enough… but to protest every month (or is it every forthnight?)?? and to risk ‘free bath’ from the water canon and to be arrested?

it’s good to hear that the person next to me, nic of mensa, and also redbox studio (who happened to be my office website’s host), agreed with me on this point. couldn’t quite remember what he said but it was a good point, which made me nod my head vigrously and mumble “see, see”. well, let’s wait for the podcast to listen to what he had to say.

my points are the government already knows we are angry, and the price had been increased will NOT ever comes down, so what’s the point of protesting on the street? there are other ways of protesting like blogging furiously about it or writing petition letters. i also said that instead of protesting, we should now concentrate on the RM4.4 bil. savings – to see that it is indeed put to good use, sort of monitor what’s happening to the RM4.4 bil. savings. i was caught off-guard when jerry suddenly asked me how do i propose that we monitor the government! i could only mumbled that we hope the government will be transparent in all it’s doing, thus we will be able to see where the RM4.4 bil. goes. though nic shared the same opinion as me, jerry did not question him because of nic saying he’s from mensa, while jerry bullied me, knowing i’m not from mensa! 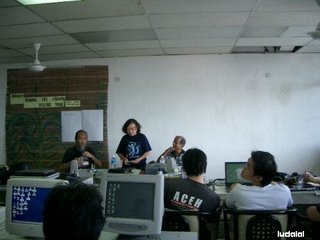 well, after jerry’s podcasting session, we went for lunch next door and after lunch, it was the blogging workshop session, of which anil, ong and i were on the panel. (picture left) anil was the first to speak, where he spoke on why and when they started the aliran blog – the aliran media monitor. after him, it was my turn. i was a bit nervous! i spoke briefly about my blogging experiences and informed about the various blogging hosts available and introduced some blogs aggregator like project petaling street (PPS). oh, also showed them how to start a blog via blogger through live demo. ong talked in details about how we can use blogs to 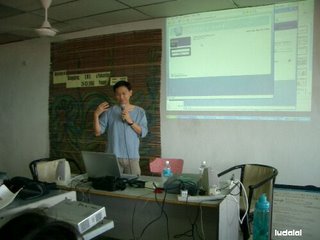 dispense information and up-to-date news, also on the need for NGO to start a blog and so on.

after this blogging talk, sam (picture left) came in with his talk on CMS. he introduced to us mambo and website baker, two of the popular CMS. we learned how to start a website with CMS from him.

after this session, it was free time for us to mingle around but as jerry had finished putting up his live podcast (from KLCC of the petrol hike protest), he let us listen to it first. he said he wants to show it to us how fast one can do a podcast and had it all up on the site for listening/downloading. indeed he was fast! 11.30am did the recording, and by 5.00pm had everything ready! oh, but he’s an expert already, so understandable he can be quick. 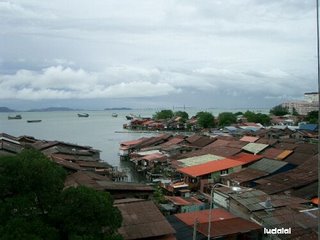 , it was a sunday well spent as i learned a lot of things, not forgetting making new friends.

UPDATED: see ong’s blog on this, including the list of attendees.
jerry’s part 2 podcast is also ready. (why is it so short? patiently waiting for part 3)