You are here: Home › religion › those religious extremist at it again

well, according to one muslim, the design of the swirling ice cream resembled the arabic inscription for ‘allah’, and he screamed “sacrilegious!” and threaten a jihad. 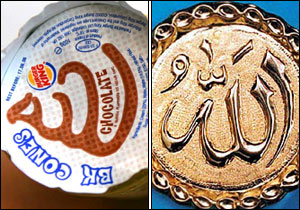 can you believe that?? this is so crazy!! wait… that’s not all. just because of this, burger king was forced to withdraw the ice cream lid and apologised to the muslim council.

oh boy! apologised for doing no wrong at all? apologised just because of some over-sensitive, over-reacting muslim? and to think burger king has to spend thousands of pounds to re-design the lid.

oh gosh! this is another case of some zealous muslim’s over-reaction and the world has to bow down to its wishes… because if not, ‘jihad’ (burning of buildings? killing innocent people?) will occur. remember the swedish cartoon of prophet mohammad’s caricature? remember the pope’s remark? *sigh* when will this ever end?

to me, the design on the ice cream lid is nothing but just a design of a swirl of ice cream cone. whether it does resembled the arabic word for allah or not, doesn’t matter. the thing is people only see what they want to see. something innocent will become sacrilegious to them. it’s like they purposely want to create trouble, so go all out to see ‘something wrong’. how sad. remember the saying ‘if you go all out to look for trouble, you will definitely find it, but if you don’t, then there’ll be no trouble at all.’

still on the subject of ice cream, and now this happened right in our bolehland. the ‘persatuan pengguna islam malaysia‘ – PPIM (malaysia muslim consumer association) made a police report that one of the new wall’s ice cream – the ‘moo walls’ ice cream biscuit has the symbol of a cross on it. look at the picture below, taken from their website: 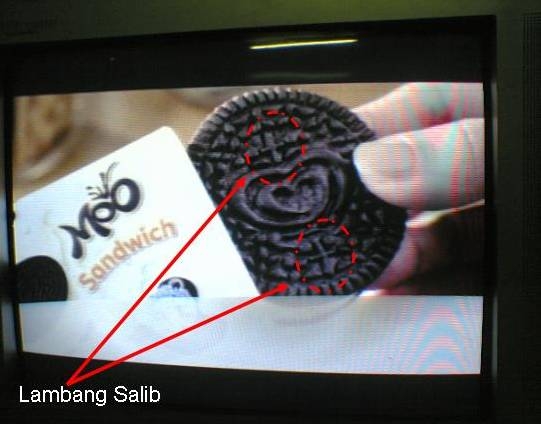 the two red arrows points to a cross symbol on the biscuit. huh? for that they want to make noises? famous blogger jeff ooi blogs on this and i found the comments of the first commenter real ridiculous. this is part of what s/he said:

the walls ice cream did have the cross symbol. it is not wrong for us to protest because this is an attempt to spread another religion to the majority of the citizen who are muslim.

i laughed so much when i read this. first of all, if the ‘cross’ on the biscuit hasn’t been pointed out by PPIM, nobody would have notice it. secondly, the ‘cross’ is just a design on the biscuit (like the design of the burger king ice cream lid). thirdly, it is so ridiculous to think that one can propagate one’s faith through a cross symbol on an ice cream biscuit. finally it is even more ridiculous to think that a muslim on partaking of this biscuit, just because s/he sees a cross on it, can suddenly have the urge to want to convert to christianity.

the comment of that one person is really an insult to other muslim. i am sure that majority of the muslim doesn’t think like him. how on earth can an ice cream biscuit with lovely designs, some of which resembles crosses, ‘take away’ your faith?

some over zealous muslim seems to go overboard at the slightest view of a cross. remember at one time our RM5 ringgit note, the design of a sphere of a tower, there is a horizontal line over the long tower (vertical), thus, it resemble a cross… and they too made noises… so much so that the notes had to be withdrawn by bank negara (if i remember correctly… or at least slowly phased out).

i really can’t understand these people – the cross symbol appearing on a biscuit or currency note will diminish their faith?

20 Responses to "those religious extremist at it again"